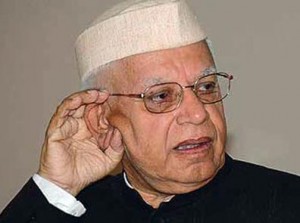 Dehradun : Veteran Congress leader Narain Dutt Tiwari, currently under directions of the apex court to give his blood for a DNA test to be conducted to ascertain whether he is the biological father of the complainant, seems to in the news for the wrong reasons.

Though he is not directly involved, but in the latest unsavoury incident, there was virtual free for all between his OSD Sanjay Joshi and nephew Manish Tiwari at the leader’s resident in the sprawling Forest Research Institute campus where the former Uttarakhand chief minister presently lives.

Even as police complaints have been made by both sides, according to reports Sanjay, who it is rumoured has been asked to quit as OSD, came to the house this morning where he was prevented by Manish Tiwari and another person. They asked Sanjay to leave the premises as he was not longer the OSD.

In the ruckus that ensued between them, there was a free-for-all in which foul language and fisticuffs were freely used, as both sides kept sticking to their stand.