Dehradun : With the opium poppy clandestinely grown by villagers in Tuini area of Uttarkashi district in Uttarakhand now beginning to blossom, officials of the Narcotics Control Bureau have also become active. A raid was conducted by a team of officials and the crop destroyed in 42 acres andcases registered under the NDPS Act against two persons.

The team led by SP (Narcotics), Dehradun, Kunwar Nirbhay Singh raided a number of villages in the higher reaches of Bangan area of Uttarkashi, adjoining the jaunsar Bawar area, which was notorious in the past as a key opium producing area and destroyed the standing opium poppy crop, which was ready to be harvested for producing opium.

Informed sources said that the opium poppy was not only being grown in forest and gram panchayat land so that they could avoid arrest. 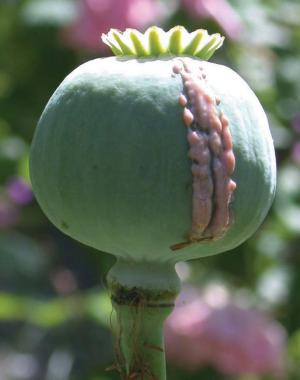 But in certain villages in the higher reaches where arrival of law enforcing teams is not expected, the villagers were also growing them in their apple orchards, for further supplementing their income, they added.

However, they confided that the Jaunsar Bawar area in Chakrata district which was notorious for producing opium for generations till the beginning of 1970s, was now comparatively free of opium cultivation, though a few persons may be doing it, albeit on the quiet.

Previously it was cultivated openly and even in the state government revenue records large tracts were shown under cultivation of opium poppy, despite no licences having been given for the same.

Sources said that though opium poppy was vastly cultivated in Jaunsar Bawar and opium produced, it was all smuggled out of the region to the opium consuming states or to Nepal where it was probably being converted into heroin.

However, the locals did use the grain of opium pod, which is used as a spice in the hill states of the country.

They said that to wean away the villagers from cultivating opium poppy, in 1988 the then Uttar Pradesh government (Uttarakhand was formed in Nov 2000) encouraged them to grow garlic and also distributed garlic seedlings free of cost initially so that the people would take up the crop.

The local people have taken to it but there are reports that with demand for opium on the rise and huge prices being offered, middlemen are luring the villagers to take to the crop again.