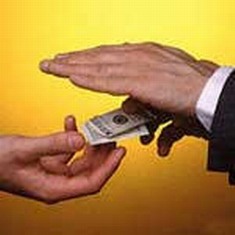 Dehradun : A couple of days back Uttarakhand transport minister Surendra Rakesh raided the RTO office here following a tip-off that money was the only way clerks moved files in the office. His raid yielded results.

While a sum of Rs 1.88 lakhs was found in the official cash box, over Rs one lakh was recovered from the person of three clerks, including a female which could not be accounted for.

But rather than mending their ways, the transport office staff is demanding that the minister apologise to them for having conducted a raid at the office and checking the pockets and purses of the staff.

The minister on his part replied that the staff could forget an apology and raids would continue till they mended their ways and delivered service to the people without “extorting” money.

However, the happening at the RTO is the proverbial tip of the iceberg for corruption has become so deep rooted in Uttarakhand that it is now accepted as a part of every day happening and no one batters an eye lid, but takes it for granted.

For after all the “bribe” money only increases by going to the higher rung of “babudom” and things only get murkier.

Sample this. A traffic inspector of police called a meeting of his sub ordinates and informed them that a sum of Rs two lakhs had to be collected every month and paid to their higher ups.

They were told that once this amount was collected they could collect “their share” also as if the top officers were to be given such a huge amount why should the lower staff be deprived of their share.

And the extortion started by the traffic police from all and sundry and became so rampant that even the notorious upper echelons found it to be embarrassing.An enquiry was conducted on the quiet and found that the extortion was going on at almost every level.

The traffic inspector rather than being removed from service or at least suspended was just transferred out.

A clerk in a state government department took offence to the raid by the transport minister in the RTO.

His grouse was that the minister should first check the goings-on right at the secretariat, under the very nose of the chief minister and his cabinet colleagues and then branch out to the other departments.

“Lakhs of rupees changes hands in the secretariat every day, right from allowing entry to moving files and this is an open secret”, he said wryly.

But then who will bell the cat. Every chief minister who has been in office has had allegations of corruption leveled against him and not one of them has either been held guilty or charged to date.

Even the commissions of enquiry that have been conducted have been a mere eye wash for neither have their reports been made public nor action taken, if any guilt has been pronounced.

However, while a hue and cry may be raised by politicians against the party in power, the fact is that corruption has become not only an acceptable part of life for the common man but the malaise afflicted Uttarakhand even before it came into existence on Nov 9, 2000 and right from the ministers to the bureaucracy and babudom making the most of the funds flowing into the nascent state, everything else from development to creating the required infrastructure took a back seat.