New Delhi:As India strives hard to protect its big cats, a study in a tiger reserve has found that busy highways and excessive road expansion will destroy wildlife populations and their habitats in the long term, as large mammals avoid such areas.

The study comes at a time when there are just 1,706 tigers left in the country and a debate is on over according the green nod to construction of highways through various tiger reserves. 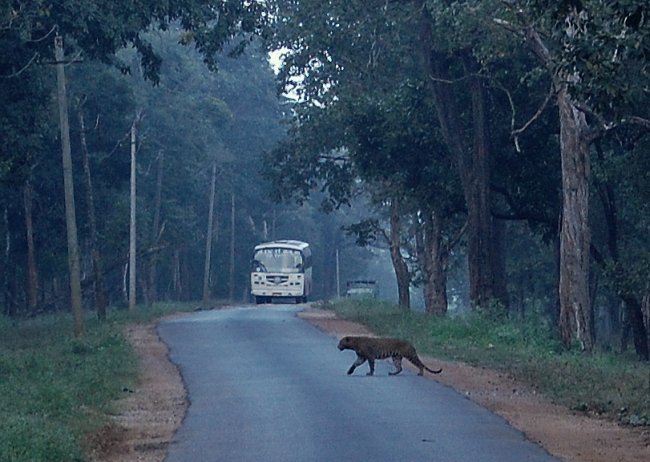 The Wildlife Conservation Society (WCS) and the Centre for Wildlife Studies carried out a preliminary study examining the impact of vehicular traffic on the usage of road edges by large mammals — elephants, chital (spotted deer), tiger, leopard, gaur (Indian bison) and wild pigs — along a highway passing through Nagarahole Tiger Reserve in Karnataka.

The team of experts estimated large mammal encounter rates using remotely triggered camera traps on two consecutive sections — one closed to vehicular traffic and the other open to vehicles only during daytime — of the Mysore-Mananthavadi Highway, passing through the tiger reserve.

In all, a total of 681 animal trails intersected the highway.

“The density of animal trails along the highway closed to traffic was over 40 percent higher than the one open to vehicular movement, suggesting a greater use of road edges by animals in the nearly vehicle-free segment,” said Gubbi.

For species such as the wild pig, tiger and leopard, the photo-capture rates were zero-inflated and a more sustained monitoring overtime may enable a better assessment of how these species respond to vehicular traffic along highways.

“Despite the fact that roads could affect numerous endangered wildlife species, there have been virtually no studies assessing their impacts, especially on large-bodied animals. As a result, the impact of roads and vehicular traffic on larger endangered species remains poorly understood in India,” the study said.

Based on our findings, the study emphasises the importance of continued ecological impact assessments of development projects to identify and mitigate unforeseen impacts.

“Further, an approach to development planning that integrates conservation concerns, especially where development projects coincide with ecologically critical areas, is urgently needed in India,” it said.

The study said sustaining India’s growth story is possible only if ecological safeguards, such as environment impact assessment, are not forsaken in the pursuit of economic growth and human development.

“If India is serious about achieving this balance, there is no escape but to invest in a more holistic process of development planning that includes – rather than ignores – the conservation of its priceless natural heritage,” it added.