Shimla: To tackle chaotic apple marketing operations, the state government intends to intervene and introduce standard cartons that would match global packaging norms and bring about market parity for the produce sold.

Making a suo motu statement in the Vidhan Sabha today, Narender Bragta, horticulture minister said that telescopic cartons being currently used had inherent draw backs which not only damaged the fruit during transportation but with the two piece box permitting was expandable that was being used by producers to pack more fruit than the box could safely hold. 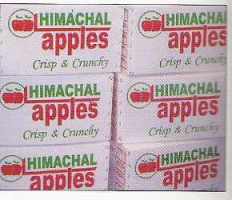 From the coming season, the government agencies HPMC and HIMFED would provide standard universal cartons for apple packaging purposes, he said.

Private manufacturers have also been asked to adopt the standard universal carton, which meets international norms, said the minister.

Directions have been issued to the horticulture department to seek the help of Indian Institute of Packaging for ensuring good quality packaging material to the fruit growers, the minister disclosed in the house.

The standard carton would be a one piece box that would not permit packaging of any extra fruit. Apple growers would be trained about fruit packaging in the new carton boxes, he said.

A standardized box was being introduced after much deliberations with all stakeholders and at the behest of fruit growers themselves who are facing stiff competition from Chinese and American apples in the market, he added.

Being one of the top apple producing states in the country, the fruit is by far the largest cash crop in the state generating an annual economy of Rs 1500 to 2000 crores.