Dehradun : With threats of a vertical split looming large over the Congress legislature party, Vijay Bahuguna was sworn in as the seventh chief minister of Uttarakhand at the Parade Ground Tuesday by Governor Margaret Alva who gave the oath of office and secrecy.

There was uncertainty earlier during the day over Vijay Bahuguna being sworn in as chief minister, as the splinter group headed by former union minister of state, was adamant on its stand that it would neither attend the swearing in ceremony, nor give up its demand of making Harish Rawat the chief minister. The group, which consists of 17 MLAs was conspicuous by its absence and stayed put in Delhi. 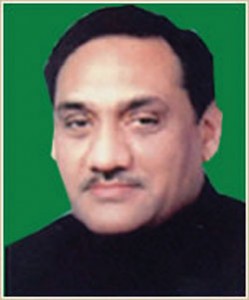 It was only after the arrival from Delhi at about 3 p m, of Vijay Bahuguna and Satpal Maharaj, MP from Pauri that the picture of the oath taking ceremony due to be held at 5 p m, became clear. Earlier there were speculations that the ceremony had been postponed for Wednesday and a meeting had been called by the party high command to pacify Harish Rawat, but they were put at rest with Vijay Bahuguna categorically stating that the oath taking ceremony would be held at the scheduled time today itself.

However, only a sprinkling of the elected party legislators, were visible at the oath taking ceremony. Prominent amongst those present on the occasion were Satpal Maharaj, veteran Congress leader Narain Dutt Tewari, former chief minister Ramesh Pokhriyal Nishank of the BJP and former vidhan sabha Speaker Harbans Kapoor.

Only Vijay Bahuguna took oath of secrecy and office today and he is likely to announce his cabinet later after consultations with the party high command.

Meanwhile the adamant Harish Rawat clarified from Delhi that the injustice dome to him would not be tolerated by his supporters, who would continue pressing their demand with the Congress high command for change in the chief minister. “There are reports that the BJP national president has been in touch with me, which is completely wrong. We will neither break away from the Congress, nor become a part of the BJP”, he asserted.