Mountain Cleaners is a registered organization now. What are your new goals and expectations?

Fundraising has to be a priority for us now. We have numerous projects to fund and the potential to start many more but we need financial assistance to make it happen. As we are registered under the Indian Trusts Act, we can no longer accept foreign donations or funding for the next 3 years. This has been a massive blow for us as previously 80% of our donations came from outside India.

On the plus side we can now officially accept donations, apply for funding grants and approach corporate companies within India. We only received 2 donations from October to January so I have been personally funding Mountain Cleaners since the start of the year putting myself in debt. We have also had to take a loan from one of loyal supporters. This has to change if our work is to continue. Thankfully last week Eco Adventures made a donation of Rs. 25,000 to us, meaning I could return to Bhagsu with enough money to pay the salaries of our 3 waste workers.

MC have stepped out of Himachal now. Tell us something about Sunburn Festival and your activities in Goa.

When the snow hits Dharamsala it’s almost impossible to work so it made sense to go where the people are and Goa was a great destination as it has a serious garbage problem that is affecting tourism. The biggest problem with Goa is plastic bags. This is something we’d like to tackle. We did beach clean ups, a flash mob, recruited volunteers, held workshops and information stalls, promoted re-usable bags and spread the word about the work of Mountain Cleaners. We would like to set up something in Goa on a more permanent basis but as always it depends on funding.

Sunburn Festival was a real eye opener for us. A total of 7 exhausting days were spent clearing the garbage from the festival. Not surprisingly the organisers at Sunburn had waste management at the bottom of their list of priorities. We were literally begging for water, food, shade and lighting, all of the things that had been promised. The entire cleaning staff was dismissed once the festival finished leaving behind garbage mayhem for our small team. Overall, Sunburn has been a good learning experience for us.

The TED Talk, how was it?

Scary it was. I have no problem jumping into a dirty stinking garbage pit but put me in front of hundreds of people and ask me to talk and it’s a different story. I get terrible nerves, have a northern accent and just can’t find the right words. Everything I want to say is in my head but it never comes out the way I want it to. I know how important it is to tell our story though especially as it was a youth event and a great opportunity to inspire others. However, it helped us to get noticed and that’s the best thing.

Problems in Dharamsala, a lot happened when you were away.

Where do I begin? The municipality is not supportive at all and has no grasp on waste management whatsoever. They recently didn’t renew the contract for the Tibetan Settlement Office (TSO) which has resulted in the dirtiest McLeod Ganj I have ever seen. All the TSO were asking for is enough money to be able to increase their staff’s wages. Rs 3000 per month, is an absolute insult to the fabulous and essential job done by the Green Workers and a pay rise is long overdue. The municipality took matters into their own hands and the results are there for everyone to see. If I came here now as a tourist I would never return, the place is an absolute mess. The government keeps getting awards for clean and green tourism; I don’t understand how do they manage to win awards.

Construction and its inevitable waste is another big problem. I would love to know how many of the hundreds of buildings being constructed are actually legal. This whole area is turning into a concrete jungle and no-one seems interested in stopping it. The trees that hold the mountain slopes together are being felled and there just isn’t the infrastructure to be able to deal with all these extra buildings. Dump sites are appearing everywhere, construction waste is being dumped and even the local Children’s Playground is being used to dump in. The word around town is that they are going to fill in the playground and turn it into a car park.

Spark the Rise and Amazing Indians Award Ceremony, a lot of things happening for you lately.

We entered a competition run by Mahindra Group called Spark the Rise, a platform to create positive change in India. We entered three times but were sadly not successful in our bid to win funding. All we needed was for people to vote for us, it seemed so simple but despite our hard work it was not meant to be. Our only hope now is that the panel of judges choose us for the Grand Finale and give us the opportunity to compete for the 40 lakh prize. Can you imagine how much we could do with that kind of money, it would a real turning point for us. We were also nominated by Mahindra to feature in the Times Now TV show ‘Amazing Indians’ for which we have just received an award. 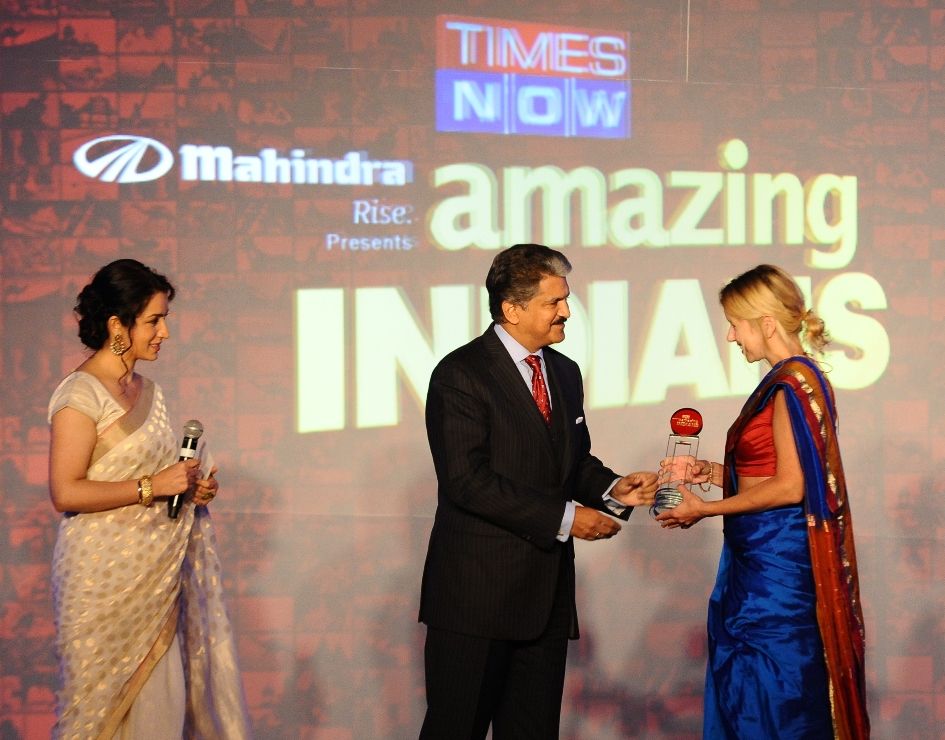 Future Plans, what next?

Wow, we have so much planned for 2012. We have been asked to set up a project in Dehradun so I’m going to do an evaluation there on 1st March. I’ll then head to Delhi as we are doing a mass clean-up in Deer Park, Delhi on 11th March, what a great way to celebrate my birthday! We are planning to participate in a “Say No to Plastic Bags” campaign in Delhi and will be doing the same in Goa at the end of the year. We are also looking forward to the IPL matches in Dharamsala in May and want even more of the players to support us by promoting our clean up campaigns. We are hoping to start a project near to the Norbulinka in the spring time. It is my dream to meet the Dalai Lama but we need more than his blessings, I need his support to encourage the Tibetans especially the youngsters to get involved. I would also like to be connected with one of his closest friends, movie star Richard Gere who purchased the garbage trucks here nearly 10 years ago in a bid to improve the cleanliness of the home of HH. I am confident he would support us if he knew about the garbage crisis in McLeod Ganj.

Mountain Cleaners needs funding and volunteers. If you would like to know more about our work or would like to help us please get in touch.