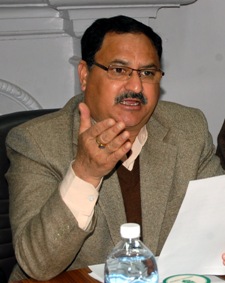 New Delhi: BJP has picked Jagat Prakash Nadda as its candidate for the Rajya Sabha seat from Himachal, the indirect election for which is to conclude by month end.

Others from BJP who have been given tickets include, leader of the opposition in the Rajya Sabha, Arun Jaitley from Gujarat, general secretaries Ravi Shankar Prasad and Dharmendra Pradhan from Bihar.

Gadkari also rewarded his long-standing business friend Ajay Sancheti of Nagpur, whose name had figured in the Adarsh Society scam, from Maharashtra.

Faggan Singh Kulaste, a tribal leader who was accused in the 2008 cash-for-vote scam, has been fielded from Madhya Pradesh by BJP along with Najma Heptullah, Kaptan Singh Solanki and Thawar Chand Gehlot.
Senior BJP leader LK Advani strongly backed Heptullah, who has completed many terms in the Rajya Sabha.
BJP vice president

Vinay Katiyar also got another term from UP.