Manali : Bestowed with great snow and steep pistes, this picturesque valley has a lot of potential, but so far the ski runs have remained underdeveloped and the costs are high compared to those in Jammu and Kashmir and Uttarakhand, say professional skiers.

“Oh! The snow is dry and the quality is good here, but the slopes are not well maintained. Ageing ski equipment, poor infrastructure and service show lack of professional touch,” remarked Angela Wickas, a skier from Britain. 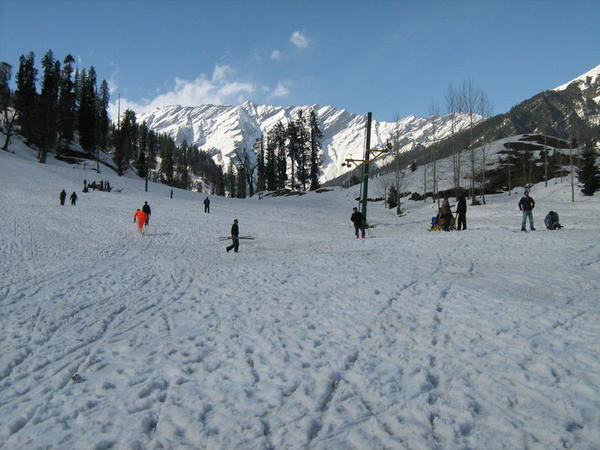 She said like Britain, the Solang ski runs are not well groomed.

The ski slopes are located just 13 km uphill from the tourist resort of Manali.

Angela and her husband Joe Welbourne were here to participate in a four-day Alpine Premier League (APL) organised by a private firm, Ski Himalayas, in association with local ski clubs and the state tourism department this month.

The championship, considered the first of its kind in the country, saw over 330 skiers, including seven Olympians in both men’s and women’s categories. Twenty-four foreigners from Canada, Switzerland, Finland, Norway, Britain and France also participated in the competition.

Welbourne said the pistes here are steep and deep, but bumpy at the top.

“The snow quality is marvellous comparable to back home (in Britain) but the (ski) lift pass of Rs.400 per trip for a skier is too costly,” he said .

Moreover, there are no snow beating machines to make the slopes more flat and good for racing, he added.

Solang slopes, which remain covered with a blanket of snow from late November to March end, have good potential like the Gulmarg and Auli slopes, said Roshan Lal Thakur, secretary general of the Winter Games Federation of India (WGFI).

Thakur, a local skier and international coach, said because of inadequate government support, the Solang slopes have not been developed as per international specifications.

The WGFI had sent a proposal of Rs.3 crore to the ministry of sports last October for developing the slopes.

The Auli slopes in Uttarakhand were also developed by the central government during the SAF Winter Games 2011, Thakur said, adding “if the Solang slopes are also developed, the WGFI will be in a position to bid for the Asian winter games championship.

“Solang slopes are still at a nascent stage of development, whereas the Gulmarg slopes are professionally designed,” said Iqbal, who was part of a 44-member delegation of the Indian Army’s High Altitude Warfare School (HAWS) in Gulmarg.

Another skier Arif Khan added: “The slopes (in Solang) are for beginners and intermediates, not for professionals.”

For Khan, who also participated in the SAF Winter Games 2011 in Auli, the Auli slopes are also of international standards.

Ski promoter Ski Himalayas managing director Amitabh Sharma said : “In the past few years, we have developed the Solang slopes. Now we are going to procure a snow beating machine from Italy. By next season, it will be here.”

Set up with an investment of Rs.36 crore, the ropeway-cum-ski project is a joint initiative between the state tourism department and Ski Himalayas. Much of the equipment has been imported and so the cost to ski is quite high, he said.

The ropeway takes the skiers to the ridge of Mount Phatru at an elevation of 3,200 m (10,000 ft) to enable them to increase the ski run by at least three kilometres.

Besides Solang, Himachal Pradesh has developed ski runs in Narkanda, just 65 km from state capital Shimla. But these are shorter and gentler, attracting mostly newcomers.
IANS