From leading politicians to the CEC to the mini-parliament of Sikh religion, SGPC, everyone expresses concern about the growing menace of drug abuse in Punjab. But the cure doesnâ€™t seem to be on their minds. 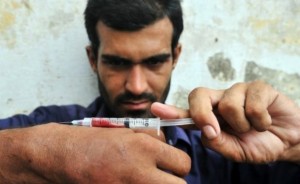 Chandigarh : From leading politicians to the Chief Election Commissioner (CEC) to the mini-parliament of Sikh religion, Shiromani Gurdwara Parbandhak Committee (SGPC), everyone expresses concern about the growing menace of drug abuse in Punjab. But the cure doesn’t seem to be on their minds.

The state, which is the food bowl of the country as it contributes over 60 percent of grains (wheat and paddy) to the national kitty, has a widespread problem of drugs, especially among youth and in rural areas.

In the last couple of months alone, security agencies in Punjab, which has a 553-km long international border with Pakistan, have recovered nearly 75 kg of heroin – a high-end drug – worth over Rs.350 crore ($70 million) in the international market.

In recent years, the seizure of heroin, which is smuggled mainly through the Afghanistan-Pakistan route, has been in hundreds of kilograms.

With just 1.5 percent of the country’s geographical area, the frontier state has now earned the dubious distinction of recovery of the highest volume of drugs in the country in recent years.

Last year, Deputy Chief Minister Sukhbir Singh Badal made a sensational disclosure. Punjab alone has accounted for 60 percent – roughly Rs.900 crore – of the total drugs seizure worth Rs.1,500 crore in the country made in just six months (in 2010-11).

The concern for the drug problem also came from CEC S.Y. Quraishi in the run up to the Jan 30 assembly polls in the state.

“We have encountered the problem of liquor during elections in almost all states. But drug abuse is unique only to Punjab. This is really of concern,” Quraishi said here.

Records of seizure of drugs by the Punjab police in the first seven months of 2010 showed the recovery of hundreds of kilograms of drugs of all types.

A senior Punjab police officer, requesting anonymity, said drugs worth nearly Rs.3,000 crore could be transiting through or landing in Punjab.

The total drug seizure in the state in recent years is much higher with multiple agencies like the Border Security Force (BSF), the Directorate of Revenue Intelligence, the customs department, the anti-narcotics cell of the Punjab police and others involved in the recovery process.

In 2009, the accumulated drug seizures by Punjab Police and other agencies included nearly 600 kg of heroin, 400 kg of hashish, 350 kg of marijuana, nearly 3,000 kg of opium and a whopping 373 tonnes of poppy husk.

An earlier study by researchers at Guru Nanak Dev University in Amritsar, 250 km from here, estimated that “73.5 percent of Punjabi youth between 16 and 35 years are addicted to drugs.”

In an address on internal security in New Delhi last year, Sukhbir Badal asserted that the narco-terrorist threat was looming over Punjab. “Seizures and arrests by security agencies have shown links between narcotics smugglers and terrorists in some cases,” he said.

At various religious congregations and small functions at gurdwaras, one common issue highlighted by speakers is the growing drug menace. While the concern is expressed, no one really suggests the cure.
IANS