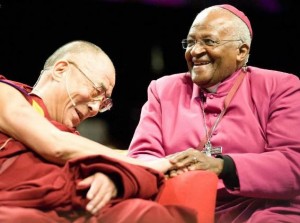 Dharamsala : He has no army, he cannot command his people with guns and he’s not a separatist.

Seeking more autonomy for the people of Tibet, Tutu said: “Please, you leaders in Beijing, we beg you, allow Tibet to be what the constitution of the People’s Republic of China commits. The constitution allows for autonomy and that is all His Holiness the Dalai Lama and his people want.”

“We beg you and at the same time remind you too that this is a moral universe. There is no way in which injustice, oppression and evil can ever have the last word,” the former archbishop said in his message to the Chinese leadership.

To the Tibetan people, he said: “We will visit you in Tibet. We will enter a free Tibet.”

Long-time friend of the Dalai Lama, Tutu came to Dharamsala to meet him.

Expressing a gesture of friendship, the elderly Buddhist monk specially visited the Gaggal airport, 15 km from his official palace at McLeodganj, to receive Tutu in the morning.

“I welcome a great person today. He is a great and world-renowned personality,” the Dalai Lama said in his welcome address.

“He’s a person who strongly advocates the importance of love, compassion and equality. Even in his own country South Africa, he along with Nelson Mandela has worked wholeheartedly through non-violence for equal rights and genuine democracy,” he said.

“The most important thing is that, even after the victory of democracy and equal rights in his country, uneasy feelings of animosity and ill-will have remained within people. Archbishop Tutu has made special efforts to reconcile the people and do away with the feelings of unease and ill-will towards each other.”

The Dalai Lama appealed to his fellow Nobel laureate to pray for the well-being of Tibetans suffering repression in Tibet.

“Tibetans are passing through a difficult period. Our sophisticated and compassionate Tibetan culture is really facing a lot of difficulty,” the elderly monk said.

“Another thing is that, he works tirelessly for truth, honesty and equality. He doesn’t see any differences. Wherever there is abuse of human rights or people’s freedom is being snatched away, be it Burma or Tibet, he is always the first person to speak against it,” the Dalai Lama said about Tutu.

In October, the globe-trotting monk had called off his South Africa visit as it was “inconvenient” for the government there to grant him a visa as it had close ties with China.

He was invited by Tutu on the latter’s 80th birthday.

The Dalai Lama has lived in exile in India since he fled Tibet during a failed uprising in 1959. He favours “greater autonomy” for Tibetans rather than complete independence.

Chinese leaders have, however, called him a separatist who wants Tibet to secede from China.
IANS