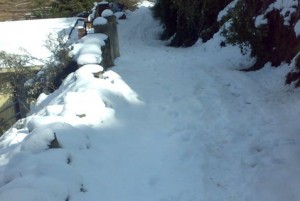 Shimla : Despite a cloudless sky for the last couple of days the relentless cold has continued unabated in Himachal Pradesh , and the weatherman has forecast more snow from Feb 12 .

A fresh western disturbance will affect the state from Sunday bringing with it snow in the mid and higher hills the latest forecast said .

People however are keeping their fingers crossed as the weather office got it wrong recently when it forecast heavy snow and rain in the last week of January and the first week of February .

It even failed to forecast the heavy snow spell earlier this week .

Many parts of Shimla district remain cut off for the past five days due to heavy snowfall .

Kinnaur , Lahaul , Spiti , Pangi and Dodra Kwar are deep under snow and remain cut off from the rest of the country since December .
People in Pangi have demanded a large helicopter service to airlift sick people .

Pangi residents have also complained that BSNL towers are down in this remote region due to which there is no BSNL mobile service for the past many days .

Popular holiday destinations like Shimla and Manali are expected to see a huge rush of tourists this weekend ahead of valentineâ€™s day .