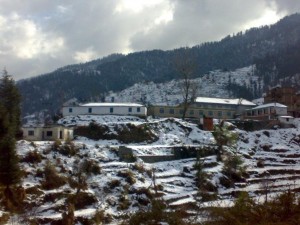 Shimla : People awoke to a partly cloudy and freezing morning in Himachal Pradesh’s two most popular tourist destinations of Shimla and Manali .

The mercury fell to minus 3.2 C in Manali while it was a little better in the state capital Shimla which recorded a minimum of 1 C .

A large number of tourists have gathered at these two holiday destinations due to fresh snowfall earlier this week .

Residents groaned in frigid conditions in the two tribal towns of Keylong and Kalpa, with minus 15 C and minus 7.2 C .

The weatherman has forecast snow in the mid and higher hills of Himachal Pradesh in the next two days .