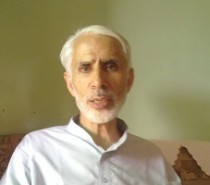 Srinagar : A number of civil society activists, for the very first time today took to streets protesting against the rising dog menace in the valley. Noted writer and social activist Zareef Ahmad Zareef leading the protests held here said that increasing incidents of dog prowl on humans have proved the state administrationâ€™s inefficacy.

Terming it as a serious problem faced by the people of Kashmir, Zareef Ahmad Zareef asserted that the onus now lies with the civil society to start a campaign aimed at eradicating this menace. The protesting civil society activists said that dogs cannot be allowed to survive at the expense of humans. They were carrying banners with slogans denouncing animal rights groups and the government. They were alleging that government is not taking any interest to control the dog menace.

They threatened to intensify the protests incase the governmentâ€™s attitude continued to be apathetic. â€œWe are organising protests across Srinagar city in coming days. Incase, the government did not take any stern step to eradicate the dog menace, the protests would be intensified across the valley,â€ protesting civil society activist Qurat Masoodi said. She added, â€œThe dogs bite the people every day and it is very difficult for the people to walk, particularly in the morning and evening hours. The government is in deep slumber.â€

Another civil society activist said there is manifold increase in dog population day by day and that government is not serious about the problem. â€œThis problem is faced by every body, be it a minister or common man. But the government is not taking any step to eradicate the menace,â€ he said and hoped that people across the valley, particularly in Srinagar city will join hands to intensify the protests against dog menace.

Pertinently, one of the serious problems which the people of Kashmir are facing is the exponential growth of dog population and the sense of insecurity caused by them. Stray dogs pose a threat to humans particularly in the morning and in the evening.

â€œThe people feel scared to go outside their homes to visit their fields because of these dogs. Parents do not allow their children to play outside their homes and even many elders feel frightened to go for morning and evening prayers,â€ said Hilal Ahmad, one of protestor said and added that the incidents of dog biting are on the rise and many people have died due to Rabies. Most of the victims have been children below the age of 10 years.

â€œThe government shows inability to take any action and the helpless society merely looks on as people continue to suffer. Whenever anybody poses a question to government and concerned departments on dog menace, they refer to some court cases and campaign carried by some animal rights activists. Despite too many cases of dog bites, government is yet to come up with any plan to end this menace in the valley. Additionally, there is shortage of anti rabies drugs in district and sub -district hospitals,â€ Hilal said.

Here it needs a mention that the stray dog population in Kashmir is estimated to be over 10 lakh. The municipal authorities last year had planned a dog sterilization and culling drive to curb the growing menace but this has been resisted by some animal rights groups and dog lovers.

More than 10,000 dog bite cases have been registered in Srinagar city alone during the last couple of years. Some of the canine attacks have proved fatal for humans.

In Kashmir, dogs thrive on a very high protein diet of non-vegetarian food waste, which is generally dumped around the street corners. According to Srinagar Municipal Corporationâ€™s [SMC] official website, more than 380 metric tons of garbage and waste is generated every day in Srinagar city. While 60 per cent of that waste is tackled by SMC, the rest literally goes to the dogs