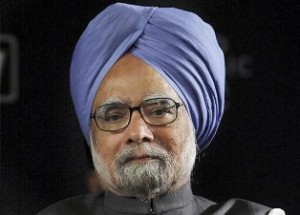 Had the prime minister acted against Law Minister Salman Khurshid, who got into trouble with the Election Commission over a similar promise and had to apologise, nobody would have dared repeat it, BJP leader Balbir Punj said.

“The silence of the prime minister is deafening and he should open his mouth about what he thinks. Had he acted on the Election Commission’s letter against Khurshid, nobody would have dared to repeat it,” he said.

“One instance could be a coincidence but attacking the Election Commission again and again… then there has to be a method. Congress is in a desperate situation as their yuvraj (Rahul Gandhi) has high stakes in UP and they are not getting any success,” said Punj.

He called the apology by Khurshid a half-hearted attempt just to get out of a sticky situation.

“One minister after another taking on the Election Commission cannot happen without the approval of party president Sonia Gandhi,” he added.

Addressing a political rally at Kayamganj assembly constituency in Farrukhabad district Wednesday, Verma had said: “Muslims don’t have their homes; they don’t have jobs and 70 percent of them work as labourers. Non-Congress governments in the state have not done anything for their betterment.

“We will make sure that quotas for them is increased if the Congress comes to power in Uttar Pradesh,” he said.