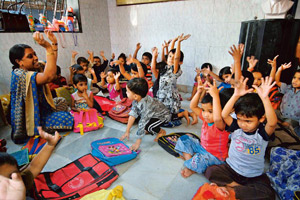 Shimla : Wages of 18,352 pre-school anganwari workers have been raised by the Himachal government Thursday .

Announcing this here the state chief minister P.K.Dhumal said the wages of anganwari workers (village pre-school child care centre workers) have been raised from Rs 3000 to Rs 3300 per month from Feb 2012 .

Wages of anganwari assistants have also been enhanced from Rs 1500 to Rs 1700 per month .

Anganwari workers have been protesting for long after the Centre announced the raising of their salaries last year .

This is being seen as a measure to woo these grassroot workers as the state goes to the assembly polls later this year .