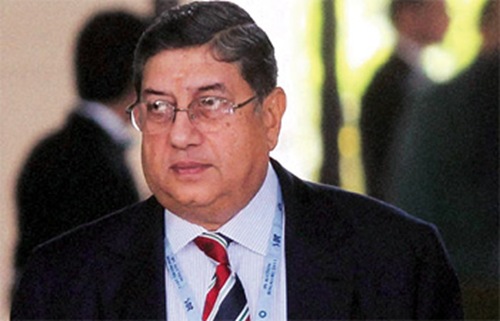 New Delhi : There appeared to be a climb down Monday by the Board of Control for Cricket in India (BCCI) which talked of reconciliation rather than confrontation with its estranged chief sponsor Sahara India.

The board’s devil-may-care tone was missing when Board president N. Srinivasan said the BCCI only has “perceptional differences” with Sahara India, Team India’s sponsor for 11 years, and insisted that all the problems would be sorted out through dialogue.

A source in Sahara said that the corporate is studying the board’s conciliatory note and weighing its options before reacting officially.

Srinivasan said he was open to dialogue for sorting out the issue with Sahara India, which Saturday announced it was ending its sponsorship deal with the BCCI for Team India and also pulled out of the Indian Premier League (IPL) franchise Pune Warriors.

“We only have perceptional differences and any dialogue is welcome. We have a long 11 years relationship with Sahara and I was surprised with their decision,” Srinivasan said.

When pointed out that Sahara chairman Subroto Roy took the decision after talking to him, Srinivasan said: “We had a long conversation on Friday evening and he expressed that he was hurt. But we never expected them to take this decision.”

Srinivasan was confident that the issue would be sorted out when the two parties sit down.

“When we sit down we can sort out all the problems,” he said.

IPL chairman Rajeev Shukla also said that “back channel negotiations” are on with Sahara to sort out the issue amicably.

“We have not yet officially heard anything from Sahara on the pull-out, but the board is ready to discuss the corporate’s grievances,” Shukla said. “After all, we have had a long and fruitful association.”

An optimistic Shukla refused to treat the issue as closed and said: “Pune Warriors are still part of the IPL and their genuine grievances would be addressed to their satisfaction.”

Shukla said the board would like to hear out Sahara first before taking any decision. In any case, decisions cannot be taken on the spur of the moment because of a festering problem.

“They have been our partner for 12 long years and we cannot take any decision in a haste. We are hopeful of finding a solution soon,” he said.

Shukla, however, was clear that no IPL rule would be bent to accommodate any team, let alone Sahara.

“We cannot change any rule in the IPL to favour a team. It would have been unfair for other IPL franchises,” he said.

Sahara chairman addressed a news conference in Mumbai Saturday after his corporate first announced it was withdrawing the sponsorship of Team India and then also that Pune Warriors were pulling out of the IPL.

The group’s grouse is that the BCCI did not show the respect a commercial partner should be shown by ignoring some of their genuine concerns with regard to the Pune Warriors.

Sahara signed a fresh sponsorship contract with the BCCI July 1, 2010, and it runs till Dec 31, 2013. According to the Rs.532-crore contract, Sahara will pay Rs.3.34 crore per Test match, one-day international and Twenty20 international under the new terms.

Sahara bought the IPL franchise Pune Warriors for Rs.1,702 crore, making it the most expensive franchise in the Twenty20 league. In all, the BCCI stands to lose around Rs.2,234 crore.
IANS