Srinagar: The maximum temperature remained below the freezing point for the fifth day Thursday in Srinagar and the weather office forecast another major snowfall here on Sunday and Monday.

“The maximum temperature in Srinagar today was sub-zero — at minus 0.5 degrees Celsius — while the minimum was minus 3.8 degrees. Another Western disturbance is approaching the Valley and there would be moderate snowfall in Srinagar and heavy snowfall in the higher reaches of the Valley on 15th and 16th of this month,” said Sonam Lotus, director of the meteorological office here. 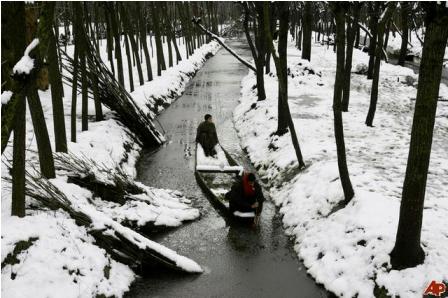 Western disturbance (WD) is the term used in India, Pakistan, Nepal and Bangladesh to describe an extra tropical storm in the Mediterranean Sea that results in sudden rainfall and snow in the region.

The WD is important for the development of the Rabi (winter) crops in the region.

The Dal Lake here froze and some shikaras (boats) were stuck as the maximum temperature in the Kashmir Valley remained below freezing point for the fifth day Thursday.

The water taps and various water bodies also froze and people had to light small fires to defreeze taps in houses.

The minimum temperature in Pahalgam was minus 12.1 degrees, Gulmarg recorded minus 16.4 degrees while Leh was minus 10.4 degress. Kargil was the coldest in the state at minus 18 degrees Celsius.