Srinagar: The water surface in this wetland reserve in Jammu and Kashmir has frozen, but thousands of migratory birds flocking it will not find themselves short of food. The wildlife authorities have arranged free lunches for them.

Situated 14 km from city centre Lal Chowk on the Srinagar-Muzaffarabad road, Hokarsar wetland reserve is the valley’s major bird sanctuary where thousands of graylag geese, mallards, pochards, Brahmany ducks, wigeons, shovellers, teals, coots and even birds of passage like the cormorants are being hosted. 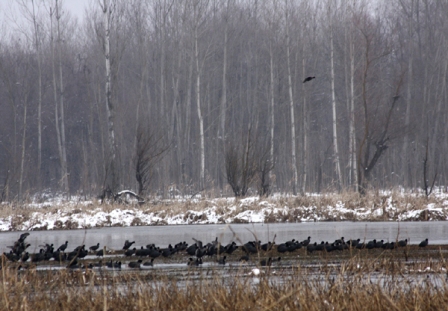 These birds come here from Russian Siberia, China, the Philippines and Turkey and Eastern Europe to ward off the extreme winter cold there.

“As the water around them freezes, the migratory birds are unable to fend for themselves. The birds feed on water chestnuts and small fish, but the frozen water surface makes that impossible,” Rouf Ahmad, wildlife warden (wetlands) of Kashmir, said .

“Thursday we started feeding the birds with paddy which is their choice diet during the harsh winter days. Many birds have flown out of the sanctuary to find food in the waste waters of the Wullar Lake where some hot spring activity keeps large chunks of water unfrozen.” 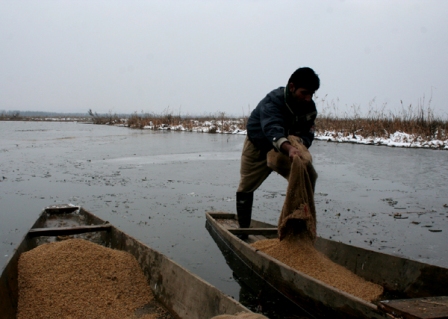 “We shall continue with the artificial feeding till temperatures improve here and the birds are able to find their own food,” Ahmad said.

Paddy was carried in boats rowed by staff posted at the reserve and thrown into unfrozen pools of water where hundreds of birds are huddled together for want of swimming space.

As the officials throw paddy into the reserve, alarmed birds take wing immediately, but wiser by instinct, within minutes they return to enjoy the free lunch.

Ahmad said the bird sanctuary had more than 600,000 migratory birds before the present severe cold wave conditions started in the valley. 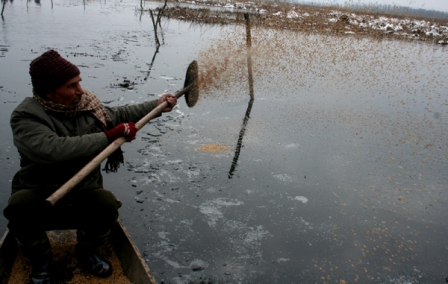 “Many of our avian guests have flown to relatively warmer places in Pakistan and the plains of Punjab and Haryana. But don’t worry, they will return to Hokarsar as the temperatures start improving here,” Ahmad said.

Kashmir has been in the throes of a bone-chilling winter during the last 15 days as even the maximum temperature here has remained below freezing point for the last four days.

The weather office here has forecast another major snowfall here on Jan 15 and 16.
IANS