Shimla: Justice Dharam Chand Chaudhary was today sworn in as an additional judge of the Himachal Pradesh High Court.

Chief Justice Kurian Joseph administered oath of office and allegiance to the new judge in presence of other judges, former judges and other dignitaries. He has been appointed for a two year term. 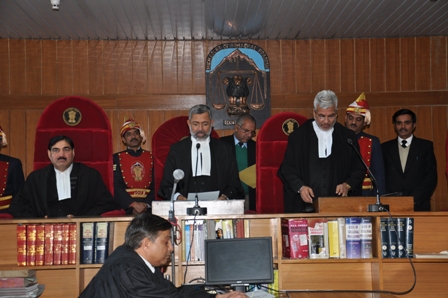 Justice C.B. Barwalia, Registrar Subordinate Judiciary and judicial of H P High Court, read out the warrant and orders of President of India and Governor of Himachal Pradesh.

Before being appointed additional and district judge in 1995, Justice Chaudhary for 12 years practiced in various courts and was a standing counsel for Palampur Agriculture University, NHPC, Kagnra Cooperative Bank and other organisations.