Shimla : In what is being described as the heaviest snowfall this time in twenty years in Himachal Pradeshâ€™s apple belt in Shimla district the damage to apple trees is widespread , say farmers .

As the skies begin to clear and farmers begin trudging into the snow covered terraced orchards they say the scale of the damage to trees is beginning to unravel. 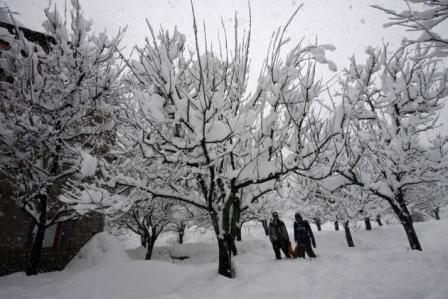 Anguished farmers say the damage is very high in some orchards by the snowfall which fell earlier this month .

At several places giant trees have either been uprooted or have broken down the middle . There is also damage to branches and twigs by the heavy snowfall .

Large tracts of land in Rohru , Jubbal , Chopal , Kotkhai , Kotgarh , Narkanda , Theog among other places are still under deep snow .

The record total snowfall in January this time has varied between 3 to 6 feet in orchards located between 6000 ft and 9000 ft altitude , the heaviest in at least twenty years.

This kind of snowfall is unheard of in recent years and has caused large-scale damage to apple trees at most places .

Farmers say the gravity of the loss can be gauged from the fact that it takes such a long time to wait for a tree to grow and then one fine snowy winter night it comes crashing down .

Although apple cultivation takes place in about six districts of the state . Shimla district alone accounts for 80 per cent of the production .

And it is in Shimla district the snowfall has been heaviest and most damaging .