Dehradun: AICC general secretary Rahul Gandhi today said that politics would not be limited to the elite or to the sons and daughters of politicians alone, but would be opened for the lay and sundry to make their presence felt and contribute in nation making.

Kick starting the partyâ€™s election campaign at parade ground in Uttarakhand, where elections are due in February next year at a fairly well attended public meeting, he said that the Congress party was working in this direction and in the next decade one could look forward to the may and sundry joining national politics. 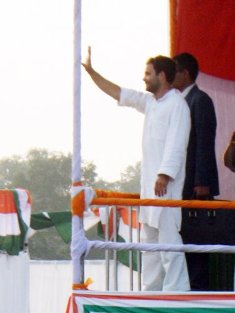 Recalling his early education in the Doon School here, he said that his father sent him for schooling to Dehradun, not because of the hills and beautiful scenery, but the fact that the city was an educational centre of the country. â€œSadly this was not worked upon to make it an international educational hub by the government of the dayâ€, he added wryly.

Asking the people to bring a government that thinks of tomorrow, Rahul Gandhi said that Uttarakhand has the best of human resources available, but sadly, the state was competing with Karnataka on who could loot from the funds being made available by the centre for various developmental works.

Asserting that the present day government was only concerned with looting the money being given for it, rather than thinking of the development and works that could be done in the coming year, he said that the need of the hour was to bring a government that has a long term perspective in mind for the people.

On the contrary, the Uttarakhand government thinks only in terms of usurping the money given by the centre for various projects, may it be for the Kumbh Mela, for the construction of roads, for health and education schemes, which was why the money was not percolating down to the masses and development was at near standstill.

Having a dig at the BJP, the AICC gen secretary said that after a five year stint at the centre in the NDA government, the party came out with a slogan India Shining. â€œWhen asked how they had coined the slogan in English, the party leaders said that they had seen India shining on television and not by meeting people at various levels, including the villages, which accounts for the majority of the population.