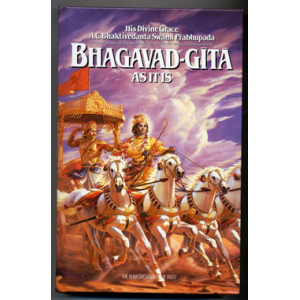 New Delhi : The case in a Russian court to ban the Bhagavad Gita continued to create an uproar Tuesday with political parties voicing their concern in parliament while the government assured that it had taken up the issue at the “highest levels”. Russia’s envoy here denounced the “madmen” seeking to proscribe the sacred text.

As the ongoing case in a court in Tomsk, Siberia, on banning the Gita on grounds that it was extremist literature, gained centrestage, MPs cutting across all party lines expressed their consternation in the two houses.

Stating that it was the work of “misdirected and motivated individuals”, External Affairs Minister S.M. Krishna sought to clarify the government’s position in the Lok Sabha: “The officials of India in Moscow and our ambassador have been in regular touch with representatives of Iskcon. We have taken up the matter at highest levels with the Russian government.”

He said he hoped the matter would be resolved keeping in mind India’s civilisational values.

The case, which has been going on since June, seeks a ban on a Russian translation of the “Bhagavad Gita As It Is” written by A.C. Bhaktivedanta Swami Prabhupada.

In a last-ditch effort, Hindus in Russia had appealed to the Siberian court to seek the views of the nation’s human rights commission on the religious text before pronouncing its verdict. The verdict will now be pronounced Dec 28.

Indians in Moscow, numbering about 15,000, and followers of the Iskcon movement in Russia have appealed to the Indian government to intervene to resolve the issue.

As the controversy escalated, Russian ambassador Alexander Kadakin said here he condemned the “madmen” seeking the ban, and underlined that Russia was a secular country.

“Russia is a secular and democratic country where all religions enjoy equal respectâ€¦ Even more applicable it is to the holy scriptures of various faiths — whether it is the Bible, the Holy Quran, Torah, Avesta and, of course, Bhagvad Gita — the great source of wisdom for the people of India and the world.

“I consider it categorically inadmissible when any holy scripture is taken to the courts. For all believers these texts are sacred,” he stressed.

The BJP took up the issue in a big way.

In the Lok Sabha, BJP leader Sushma Swaraj demanded that the government declare the Gita a “national book”.

Her demand found resonance with her colleague Tarun Vijay in the Rajya Sabha. “Can sun be banned, Himalayas be banned…?” he asked.

Rajya Sabha deputy chairman K. Rahman Khan said “the entire house agrees with this and joins in condemning this”.

It came to light that the government had advance notice of the move in the Tomsk court.

As early as Nov 1, in a letter to Prime Minister Manmohan Singh’s Principal Secretary Pulok Chatterji, Krishna devotees urged the government to use “some high-level ministerial visits” to Moscow, ahead of Manmohan Singh’s own trip, to ensure that the sacred text was not banned.

“As a reason the affidavit quoted an assessment by a panel of expert stating that Krishna is evil and not compatible with Christian views,” said the letter, written by Iskcon’s governing body commissioner Gopal Krishna Goswami. A copy of the letter is with IANS.