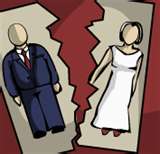 New Delhi : The number of divorcees under 25 years of age has risen over the years as the number of separated couples have gone up from two percent in 2008 to eight percent in 2011, said a study by a matrimonial website Jeevansathi.com.

However, there is a dip in the number of divorcees over the age of 50. Their number has dipped from six percent in 2007 to three percent in 2011.

“Incompatibility and lack of adjustment is the key reason for increase in the number of divorce profiles amongst youngsters,” said Rohit Manghnani, business head of Jeevansathi.com.