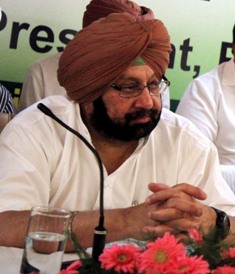 Jalandhar: Dismissing the oppositions campaign against FDI in multi brand retail as petty politics, Punjab Congress president Capt Amarinder Singh said that it would do farmers good and they would not have to throw away potatoes should it be allowed in the country.

Speaking to the media here on Friday, Amarinder said that both producers and consumers are at the receiving end of middlemen and FDI would help to reduce it for the benefit of both.

He added that the UPA government was all for controlling inflation and taking a decision about allowing FDI in multi brand retail was once step in the direction but the oppositionâ€™s shortsightedness derailed it.

â€œPotato farmers would not have to throw away their crop, if FDI enters the field, he said.

Mentioning the protests by farmers, he said that the government was not keen in solving their problems through dialogue but was intent on suppressing them by police batons.