Shimla:The farm debt waver scheme may have translated into votes, returning the UPA government to power for another term, but it has seriously dented bankers, mainly cooperative banks here, whose recoveries have sharply fallen and the whole approach to farm credit stands affected. 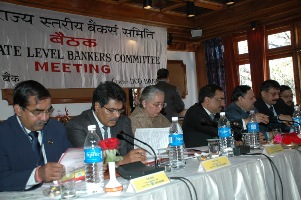 At the state level bankers meet today that was presided over by chief secretary Asha Swarup and was attended by SK Goel, CMD of UCO bank, which is the lead banker for the state, it was disclosed that between March 2009 and June 2009 loan recoveries at the cooperative banks had alarmingly fallen from 86.24% to 55.83 percent.

Recovery was considerably lower for government sponsored programs also which fell to 64.52% June 09 from 87.58% in March 09.

Later speaking to the media, Goel said that the recoveries were low because the whole state faced a drought and farm productivity and incomes fell.

As the whole state was declared drought hit, under Reserve Bank of India guidelines loans would be restructured and rescheduled, he said.

However, others differed saying that since it was mainly the cooperative banks that had taken a hit, it was the debt waver scheme which was mainly responsible for the drop in loan recoveries. One banker on conditions of anonymity said, â€œfarmers, who mainly do their banking with cooperative banks, in the hope of another debt waver scheme were reluctant about repaying their loans.â€

In her address Swarup said that the government had launched two ambitious projects for farming community that were bound to bring socio-economic transformation.

Referring to the Pandit Deen Dayal Kisan Baagwan Samridhi Yojna and Doodh Ganga Yojna, she asked the banking sector to provide credit facilities to the farmers under these projects.