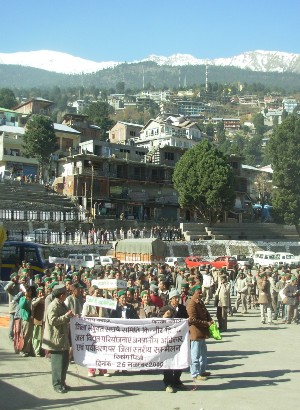 Shimla: Opposing the development of hydropower in Satluj River basin, hundreds of people in the tribal district of Kinnaur held a protest in Rekong Peo, the district headquarter, over the political leadership was turning a blind eye towards their concerns about irreversible environmental damage and violations of tribal lands being committed by multitude hydropower projects.

People from different â€˜sangharsh samitisâ€™ came together to form a joint action committee that would attempt to assert the rights of the tribals over their land and natural resources, said RS Negi,president of Him Lok Jagriti Manch, an NGO.

Out of the 21,000 MW hydropower potential in, approximately 10,000 MW is considered to be in the Satluj basin.

Sushil Sana of Khab-Shaso Sangharsh Samiti said that the power companies had repeatedly broken commitments that were made during public hearings. â€œIt was only natural resources which provided livelihood security and these projects were bent upon destroying it all, he said.

If all the proposed projects on Satluj Basin, which are over 20 projects, are allowed to be constructed, then by next ten years the entire river system would be flowing inside tunnels, accentuating the impact of climate change in the valley, said Negi.

Narinder Kumar of Rispa village who has been affected by construction of Tidong I project narrated that reckless deforestation was going on unchecked. Only 1261 trees were permitted for felling but state forest department itself has recorded that about 4500 trees are likely to damaged in the project area.

Pointed out blatant violations of environmental and tribal laws taking place Negi said that political representatives of the area were totally tight lipped about it for reasons best known to them.

He said that a police complaint had been registered against the Deputy Commissioner of Kinnaur in case of encroachments made by the Jaiprakash Associates for the 1000 MW Karcham Wangtoo project on Satluj River, but no actions had been taken.

Guman Singh of Himalay Niti Abhiyan another NGO participating in the protest said that the state government by harping about climate change at big conferences only had its eye on enhanced â€˜green bonusâ€™ allocations without bothering about what was happening on the ground.

Real climate change was being brought about by the construction of big dams near glaciers, reckless deforestation and muck dumping but the government considers this as clean development, he said.

Calling for a comprehensive review of hydropower development in the state, Singh said that such ‘clean development’ only benefited cement, steel and the construction industry but not the people who reside in the state.