Shimla: A lame UPA government especially after the retail FDI fiasco contrasted with the relatively good performance of the BJP government here in the bye-poll has emboldened some in the ruling party to consider a snap poll to beat the incumbency factor.

Without ruling out a snap poll chief minister Prem Kumar Dhumal when quizzed by Hill Post on the day results of the Nalagarh and Renuka bye-elections were declared about holding of an early general assembly election, he responded, â€œa decision about it would be taken at an appropriate time.â€

â€œWith Congress still to throw up a credible leadership to challenge the ruling party could just be the opportune time for holding an election in the state,â€ said a top BJP leader without wanting to be identified. 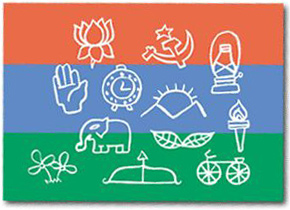 He added that irrelevance of the Bhrastachar Manch also stood exposed. The manch was constituted a day before the bye-elections were announced and mainly consisted of those BJP leaders who are out of favor with the Dhumal faction and are considered to be close to Shanta group.

With losing Nalagarh candidate Gurnam Kaur counted as one from the Shanta camp and winning Renuka candidate Hirdya Ram from the Dhumal camp, the balance has decisively tilted in favour of the chief minister camp, he opined.

While BJP is weighing its option about a snap poll, old guard Congress leaders are worried about Virbhdara losing his Midas touch in winning elections.

â€œFirst a loss in Rohru bye-elections, a constituency that our senior leader represented as chief minister and now losing Renuka, where the union minister personally campaigned for 6 days does not woe well for Congress,â€ said a congressman with affiliation to the Virbdhara camp.

With the winning Nalagarh candidate Lakhwinder Rana belonging to the Kaul Singh Thakur camp and the losing candidate in Renuka Vinay Kumar counted as part of Virbhdara group, the scales had tilted in favour of a leadership change for congress.

Given the disarray in the Congress camp both at the center and the state, he added, â€œit could just be the right time to take a call about holding early elections in the state.â€