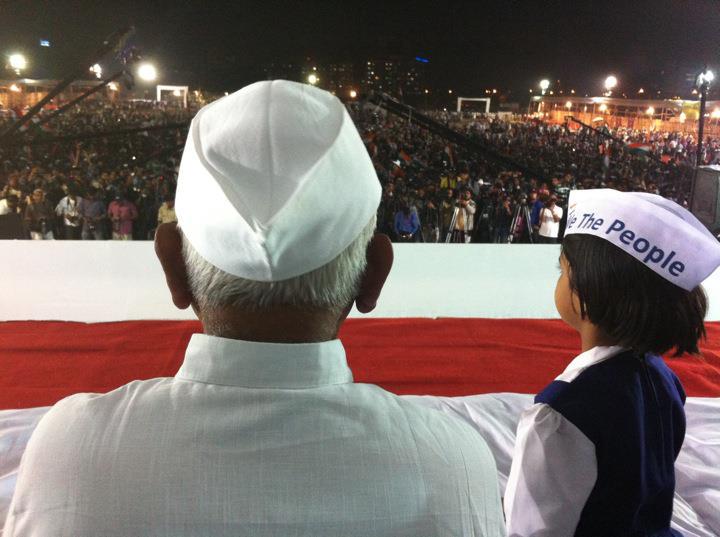 Mumbai : A day after the Lok Sabha passed a Lokpal bill he had trashed, an ailing Anna Hazare Wednesday called off his three-day fast a day earlier but vowed to campaign against the Congress in all the five states facing elections early next year.

After initially refusing to bow to appeals from doctors and associates, the 74-year-old announced his decision over 24 hours after he had launched his protest Tuesday at the MMRDA ground demanding a “strong Lokpal”.

Looking weak but sounding bitter, he also axed the proposed “Jail Bharo” campaign that was to start across the country Friday. Aide Arvind Kejriwal said Team Anna would review its strategy soon.

Hazare’s announcement came after his Mumbai hunger strike failed to draw the huge crowds his 12-day August fast in Delhi had attracted, forcing the government then to virtually accept his key demands.

But the government backtraced later, refusing to unveil Citizens’ Charter and bring the entire bureaucracy under the Lokpal’s ambit.

Looking grave on the stage Wednesday afternoon, Hazare accused the Congress-led government of “betraying” the country by passing what he said was “an ineffective Lokpal”.

He said he will tour Goa, Manipur, Punjab, Uttar Pradesh and Uttarakhand to campaign against those who did not vote for his “Jan Lokpal bill”.

“This is the only way forward after seeing what happened in parliament yesterday,” he said, referring to the passage of the Lokpal bill Tuesday night in the Lok Sabha.

He had originally decided to fast from Tuesday to Thursday. But after he developed viral fever, doctors pressed him to end his fast without further delay, warning his rising blood pressure could cause kidney failure.

Later, as reporters began asking questions, Hazare walked out of the stage. But Kejriwal took over, replying to a volley of questions including those that sought to question the Anna movement’s relevance.

“We are not retreating,” said Kejriwal, a former Indian Revenue Service officer who has emerged as the best known face of Team Anna. “We are going to intensify our agitation.”

He clarified that Team Anna was not against the Congress and the United Progressive Alliance (UPA) per se but the Congress was the guilty party as it was the driver behind Tuesday’s Lokpal bill.

That bill, he said, was meant to protect the corrupt and not to kill corruption.

In Delhi, his colleague Prashant Bushan said the debate over the lack of constitutional status to the Lokpal did not matter since the bill that the Lok Sabha passed was “a toothless and useless institution”.

A team of doctors led by T.P. Lahane of J.J. Hospital had earlier urged Hazare to immediately end his hunger strike.

They said his blood urea nitrogen and cretanine levels had risen and sodium levels had fallen. He had 100 degrees temperature.

“We are clear he should not continue this fast as his kidneys are getting affected,” Lahane said.

Wednesday’s premature end to the hunger strike capped an emotive campaign that began in April when Hazare fasted for five days in Delhi, forcing the government to talk to his team over a proposed Lokpal.

He again fasted for 12 days in August and for a day this month, becoming a household name across the country.
IANS