Shimla: Opposing the Food Security Bill, chief minister Prem Kumar Dhumal today cautioned that there were various aspects about it that would be imposed on the states, causing national problems at a time when farmers are already committing suicide because of small and marginal farming being unviable. 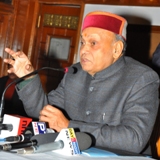 Talking to reporters, he said, â€œwhy would anybody take to farming if rice is to be provided at Rs 3 per Kg and wheat at Rs 2 per Kg.â€

â€œThe scheme would further damage the farm sector which is already in the midst of a crisis,â€ he added.

Terming it a bill that would cause national problems, Dhumal said â€œwhat more, the central legislation would burden the states as part of the costs involved would have to be borne by them.â€

Instead of the Food Security Scheme, the government should double the wages of MNREGA scheme as it would not only put more money into the pockets of the poor but also improve productivity, said the chief minister.

Responding to a question, the chief minister said that in the last four years, 309 MW of additional power generation capacity had been added in the state.

Ruling out permitting laying of private transmission lines, he said that a valley based power evacuation systems were being laid with the help of financing for Asian Development Bank.

Admitting that the financial condition of the state was not healthy but he claimed that it was not as bad as was being made out. He said that the 7.19 % share in Bhakra Beas projects being managed by BBMB would bring additional revenues, besides the arrears that are due to the state.

Regarding the likely impact of Punjab government having announced may sops for employees during the run up to the ensuing elections, Dhumal brushed it aside saying, â€œit remains to be seen as to what finally gets implemented.â€

In response to a question about high cement prices in Himachal, he said that road transport was responsible for high prices but the government was impressing upon the cement manufacturing companies to reduce prices.

When attention was drawn towards the failure of governments programs in curtailing wild life menance, especially monkey menace, he said that the government had approved of opening 21 more monkey sterilization centers and had even increased the monkey catchers fee to Rs 500 per simian.

â€œWe had even permitted culling of the animal but the courts have intervened,â€ said Dhumal.