Srinagar: Gunshots have been resonating in scenic Kashmir for more than a decade now. Amidst the violence, what once was a profitable business and provided livelihood for many, only a few gun manufacturing units have survived the turbulent times in the valley.

Having established a gun manufacturing factory in a land that is dotted with graveyards (Malkhah) where thousands of stone epitaphs mark the dead, Ghulam Mohammad Zaroo passed the art of making fine guns onto his family.

Wearing thick glasses hammering a rock solid iron rod, Nazir Ahmad Zaroo, one of Ghulamâ€™s sons, has been able to run this factory despite the turmoil around and keeping his inherited business going.

Zaroo gun factory is one of the oldest gun manufacturing units of Kashmir and is known for making 12 bore single barrel and double barrel guns. 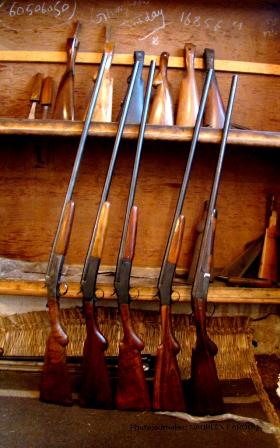 â€œOur guns are one of the finest in the country. This factory was established during the Maharajaâ€™s rule and was much sought after in those days,â€ says Nazir.

Located in the Rainawari area of Srinagar City known as Bandookh Khar Mohalla (meaning gunsmith locality) where most of the manufacturers were concentrated Zarooâ€™s gun factory is one of the few that has survived the valleys decade old turbulent times.

â€œOurâ€™s was a profitable business during the Maharajas rule. Foreigners, who loved hunting, from different parts of the world would come to us. Times have changed. Today it is very difficult to run such a factory in such a landâ€, laments Nazir.

He says that 12 bore guns are mainly used by hunters; some are used by security agencies, including the police. 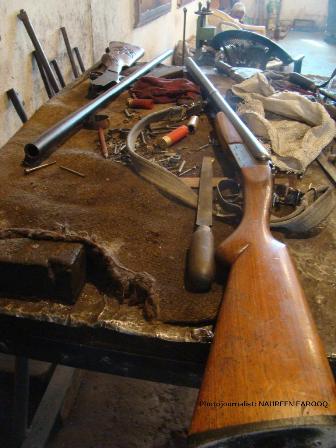 â€œThe 12-bore guns, a distant throwback from the Kalashnikovs, were once best in their class and were proudly used by Maharajas,â€ he recalls.

â€œThe guns that we produce here are countryâ€™s finest guns, as you can see these guns are rich in craftsmanship and finish. There is potential for employment but nobody is ready to work hereâ€, sighs Nazir.

In early ninetyâ€™s, when militancy was in its infancy in the valley, the government ordered closing down the gun factories so as to ensure that weapons did not fall into the hands of militants.

Prior to 1947, the Kashmir gun factories were abuzz with activity, supplying thousands of intricately fashioned guns to the princes and elites of India.

â€œAfter enforcing the ban for two years, it was revoked and the gun makers were allowed to resume work under strict supervision, he adds.

We are allowed to manufacture only a limited number of guns, with the quota decided by the Union Home Ministryâ€ Nazir says. 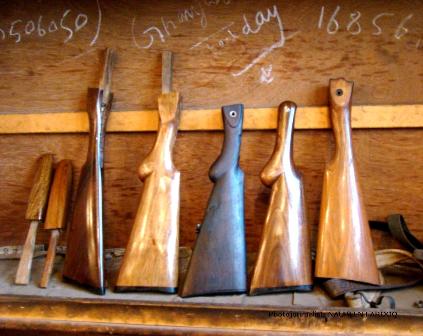 The business is on the decline. From its heyday when there were 40 people employed, the count has gone down to 10 who work on manufacturing 200 guns annually that are allowed by the authorities.

With locals showing no interest in the craftsmanship, even of the 10 employed, 4 are from outside the state who have helped me to keep the business running, Nazir sums up.