Shimla: The Himachal government signed up a letter of intent with the government of Canadian province British Columbia for starting developmental programs that include synergies in the fields of energy, forestry, agriculture and tourism. 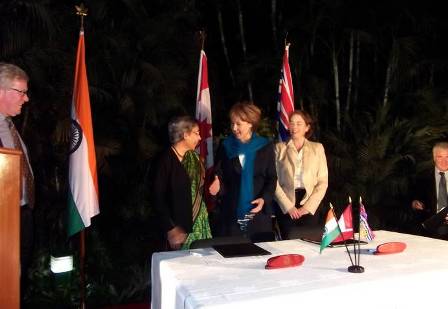 A Memorandum of Understanding between the two provincial governments is to be signed in six months time, he said.

He added the letter of intent feature envisages starting developmental programs of mutual interest in both countries.

These programs include, promoting cooperation and exchange of information in the field of energy, forestry, agriculture and tourism.

As the geographical area of both these states is similar, both will be benefited immensely by exchange of technologies and will learn more from one another in order to strengthen the economy, said Sandhu.

The state can make advancement in horticulture by importing root-stock and can learn more from about hydro power development systems. Other areas of mutual interest included promoting investment and building technical linkages between enterprises and projects of cultural, artistic, education and research.

British Columbia is the western most of Canadaâ€™s provinces that has a population of about 44.19 lakhs. Vancouver and Victoria are the largest cities of the province.