Though comedy has grown into a lush genre over the years, few directors in India have mastered the art of relaying it on celluloid. “Tere Mere Phere” is an earnest endeavour by actress turned director Deepa Sahi.

“Tere Mere Phere” is not only a romantic comedy, it is a black comedy, slapstick comedy, satire, comedy of manners, screwball comedy — all rolled in one. Deepa’s attempt to weave in every sub-genre of comedy is probably the nemesis of the movie. 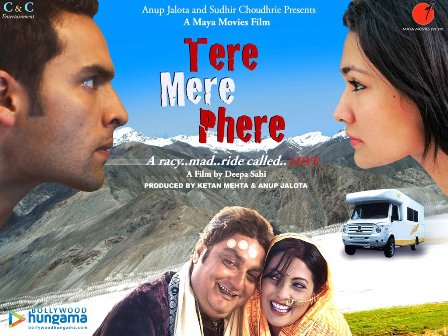 The premise of this film is about compatibility in a marriage. The story revolves around two couples – Rahul and Pooja (Jagrat Desai and Sasha Goradia) and Jai and Muskaan (Vinay Pathak and Riya Sen). Their lives get intertwined by fate.

A squabbling Rahul and Pooja are on their way to Shimla by flight. They are on the verge of splitting after three days of honeymooning in a motor home, travelling in Himachal.

But the aborted landing of their aircraft takes them back to their incomplete honeymoon with Jai for company. Jai is desperate to meet his sweetheart Muskaan, who would be forcibly married by her brother to some other bloke.

The narration slips in and out of numerous cantankerous moments of flashbacks to reveal to a lovelorn Jai as to why they (Rahul and Pooja) are bickering all the time. By the end of it, Jai is convinced, by watching Rahul and Pooja, that familiarity breeds contempt.

He decides that marriage is not for him. He makes a decision to desert his waiting Muskaan. Roles reverse with the climax culminating at the hilarious fast forward wedding of Jai and Muskaan.

The scuffle in the aircraft cabin with force fed humour sets the tone of the film for a mediocre fare. The scenes that follow seem substandard and clumsy. With no detailing done, the characters seem to be shallow.

The plot has no major inciting moments and with screechy loud dialogues like – “Tum kya Eskimo thi?”, “Tum kya chipkali ho?” and “You are queen of Main Main”, “No you are king of che chee”. The script along with the dialogues seems to be the weakest point of the film.

The film belongs to the newcomers Jagat Desai and Sasha Goradia. For first timers, they exude confidence. Sushmita Mukherjee as Rahul’s overbearing mother is convincing. Riya Sen with a naturally poker face and sing song expressionless dialogue delivery is a bad choice for a comedy film.

Vinay Patak is wasted as he hardly has anything to do in the film.

On the other hand, the verdant Himalayan terrain is beautifully captured by cinematographer Christo Bakalov. The film has been shot in beautiful and unusual parts of Himachal, especially in the newly opened Kinnaur Valley. The climax of the film has been shot at Hatu Peak and Jhamunda (near Tethys Resort, Narkanda).

The music by Shivangi R. Kashyap is nothing to write home about.

The first half of the film is just tolerable. The second half has its moments of extreme comedy. The end is equally disappointing leaving the viewers wondering as to why you wanted to witness this meaningless marriage.