Dehra Dun : The Archeological Survey of India (ASI) has expressed fears that if immediate repair works are not undertaken on the centuries old Kedarnath temple, one of the major shrines visited by lakhs of pilgrims in the inner Garhwal Himalayas of Uttarakhand every year, may fall down. 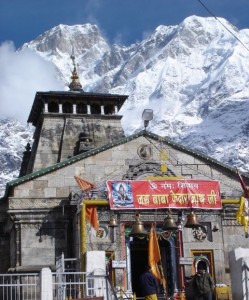 Informed sources in the ASI said that the cracks that had appeared on the outer structure walls of the temple were a major cause of concern, because of the fact that they were widening with the passage of time.

However, the sanctum sanctorum of the temple, said to have been made somewhere between the 10th and 12th century at a height of about 3600 metres was not affected.

They said that the ASI had written a letter to the Badrinath Mandir Samiti, the committee that controls the four major dhams of Gangotri, Yamnotri, Badrinath and Kedarnath in the Garhwal Himalayas, informing them that the cracks were widening on the wall of the outer structure and required immediate repair works, but the Samiti had yet take a decision in the matter.

It may be recalled that the Kedarnath shrine is one of the 12 jyotirlingams of the country and is located along the banks of the Mandakini river and so that it is not lost to posterity the ASI wants that it handed over to the department so that the ancient temple can be well looked after and preserved from further destruction. They have also assured that there will be no difficulties to pilgrims in continuing with their worship at the temple.

But as the Badrinath Mandir Samiti does not want to hand over the temple to the ASI there is uncertainty over the matter as the ASI, which can take over the temple, if it so desires in national interest but is reluctant in doing so fearing that it could hurt the sentiments of the millions of Hindus the world over and wants that the matter be resolved amicably with the consent of the Samiti.

Meanwhile a Samiti spokesman confirmed that they had received a proposal from the ASI for putting a layer of chemicals on the sanctum sanctorum and other walls of the temple, which would cost over Rs 22 lakhs and as such a decision was yet to be taken in the matter. â€œWe have also got an offer from a devout to bear the entire cost of the chemical treatment, which is being looked intoâ€, he added.