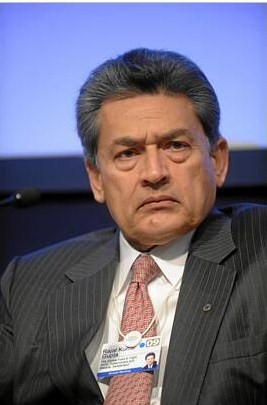 New York:Â Rajat Gupta, a former Indian-American Goldman Sachs director, was indicted for securities fraud by a US federal court shortly after he surrendered to authorities Wednesday morning.

The six count charges accuse Gupta, 62, of engaging in an insider trading scheme with former Sri Lankan billionaire hedge fund manager Raj Rajaratnam, who was the prime target of the probe.

Rajaratnam was sentenced to 11 years in prison and ordered to pay a $10 million fine earlier this month after being convicted in what prosecutors called the biggest hedge fund insider trading case in US history.

Indian-born Gupta is awaiting an appearance at the federal court. He’s charged with one count of conspiracy to commit securities fraud and five counts of securities fraud. The charges carry a potential penalty of 105 years in prison.

In a release, US Attorney Preet Bharara said Gupta broke the trust of some of the nation’s top public companies and “became the illegal eyes and ears in the boardroom for his friend and business associate, Raj Rajaratnam, who reaped enormous profits from Mr. Gupta’s breach of duty.”

“Today we allege that the corruption we have seen in the trading cubicles, investment firms, law firms, expert consulting firms, medical labs and corporate suites also insinuated itself into the boardrooms of elite companies,” he added.

FBI Assistant Director-in-Charge Janice Fedarcyk said the arrest was the latest to occur in an initiative launched by the FBI in 2007 against hedge fund cheats.

“The conduct alleged is not an inadvertent slip of the tongue by Mr. Gupta,” she said. “His eagerness to pass along inside information to Rajaratnam is nowhere more starkly evident than in the two instances where a total of 39 seconds elapsed between his learning of crucial Goldman Sachs information and lavishing it on his good friend.”

The indictment said Gupta shared confidential information about both Goldman Sachs and Procter & Gamble from 2008 through January 2009, knowing that Rajaratnam would use the secrets to buy and sell stock ahead of public announcements.