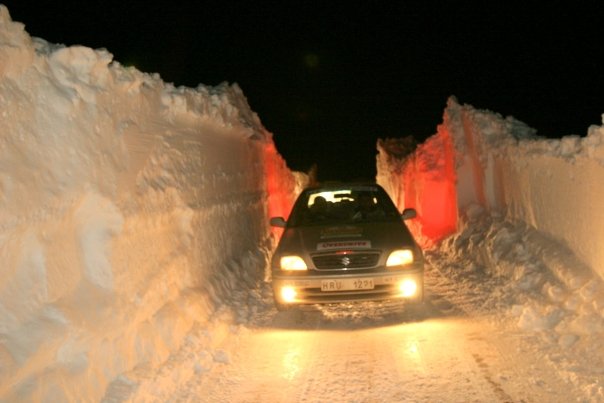 Shimla: Having charted out a different route that tested the grit and determination of many near professional rallyists, it was the brother team of Umesh and Yogesh Raheja which came out winner in the Adventure Trial of Raid de Himalaya 2011 SUV class and Pratap Thakur with navigator Amit Gosain who were declared winners among the cars class.

Raid spokesman RS Dhaliwal over phone informed that in the SUV class the Raheja brothers (Penalty time 5.03) in a Suzuki Vitara had won the Adventure Trail at the Raid, in second place was the team of Anil Satoskar with navigator MK Musthafa (Penalty time 13.49) in a Mahindra Scorpio and in third position was K Sheedhar Urs and K Prasad (Penalty time 13.58) in a Maruti Gypsy.

While the Thakur-Gosain team was winner in the car class, in second position was Rajesh Chalana and Rakesh Diwan, said Dhaliwal. The top two positions were won by Maruti SX4 vehicles, the organizers revealed.

In the Moto alpine class the winner was Puran Singh Bisht on a Bajaj Pulsar (Penalty time 7.13.03), Ashwani Kataria on a Hero Honda Karizma second (with a penalty time of 7.52.34) and third was Manmeet Dhanjal on a Yamaha RX 135 (Penalty time 8.56.52)

In all about 75 vehicles had entered the fray for the adventure trial rally held alongside the X-treme version of Raid de Himalaya.

Sheer logistics of an increased entry for the Raid made the organizers draw a different route for the Adventure Trail, which after going the same route as the X-treme one changed from Kullu and headed to Mandi, Kangra and ended the second day at Dalhousie in Chamba district.

Day three the Adventure moved through a new route over Chatergala and Sinthan Passes in Chamba to Kathua, Doda, Kishtwar, Anantnag, Pulwana and ended after logging 450 Kms at Srinagar.

The prize distribution would be held tomorrow in Srinagar with uncorking of Champagne.