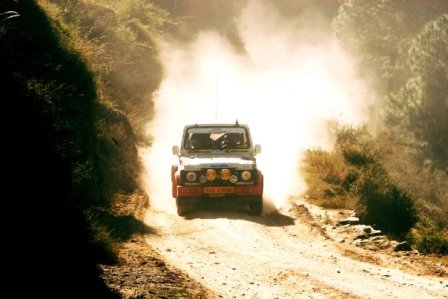 The event spread across six days was flagged of on October 11 here at Shimla and ended at Srinagar today. Raid organizer RS Dhaliwal said that the event had concluded safely.

With the bikers getting the better of four wheelers, this years Raid had at least five bikers surpass the best timings of a four wheeler category, said Dhaliwal.

Among the four wheelers the team of Suresh Rana and Ashwin Naik logged in with a penalty time of 12.41.22 and won the Raid for the 7th time in 13 editions that the rally has been held since 1999. In second position was Harpreet Bawa with navigator Virender Kashyap having a total penalty time of 12.47.24.

Lt Col Shakti Bajaj and navigator Maj BN Prakash finished the day in third position for the four wheel X-treme category with a penalty time of 12.48.20.

Winner of the 11th Raid Major AS Brar who was in second position till Day Three, began to have mechanical trouble and suffered a shocker breakdown on Day Four. He had to drop out of the rally, said the Raid spokesman.

Austrian national Helmut Frauwallner got the better of the winner of last two Raidâ€™s Ashish Moudhgil to win the biker category for the first time.

He also becomes the first foreigner to win one of Indiaâ€™s most prestigious motorsport event. Frauwallner had a total penalty time of 10.28.23 where as Moudhgil logged in with 10.39.47 penalty time.

The third position in the biker X-treme Raid also was won by Team Austria with Lehner Gottfried beating Suresh Babu who till the end of day four was in the race. Gottfried finished with a total penalty time of 11.50.59 said Dhaliwal.

Interestingly, even the fourth position among the bikers which is counted the toughest competition at the Raid was the other Lehner brother from Team Austria who finished with a penalty time of 12.07.50.

In the motorcycle team event, it was Team Austria that won Raid de Himalaya, 2011, he said.

In all 30 vehicles had entered the fray in the X-treme category which included 44 four wheelers and 36 two wheelers.