Kullu : The colourful weeklong Kullu Dussehra festival ended Wednesday as 225 gathered deities started their homeward journeys to their respective village temples in beautifully decorated palanquins amid the blowing of traditional trumpets and beating of drums. 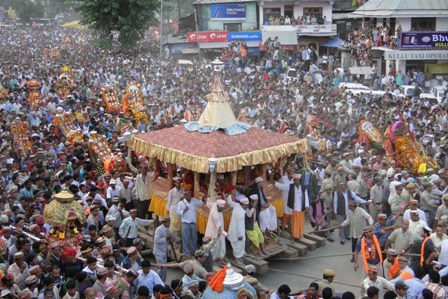 The unique Kullu Dussehra is a centuries-old festival and celebrations begin the day the Dussehra festival ends in the rest of India.

“All the assembled deities at the Dhalpur grounds have started moving back to their villages,” Deputy Commissioner B.M. Nanta, chief organiser of the festival, said.

Like every year Dussehra festivities came to end with the chariot of chief deity Lord Raghunath, being pulled by thousands of devotees, returned to the Lord Raghunath temple here.

The festival dates back to 1637 when Raja Jagat Singh was the ruler of Kullu. He invited all local deities in Kullu from various temples to perform a ritual in honour of Lord Raghunath during Dussehra.

Since then, the annual assembly of deities from hundreds of village temples has become a tradition.