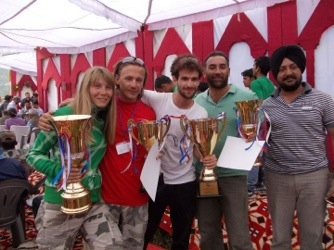 She said Anatolij Lomovtsev from Russia and Gurpreet Singh Dhindsa from India were second and third, respectively, in the category.

However, in the Himalayan Paragliding Championship, the consolation prize for the only single woman participant from India was given to Ringzing Doma Bhutia of Sikkim.

According to the event organisers, in the tandem spot landing competition, Surjit and Vinod Kumar secured first position, while Surinder and Shubash Thakur and Amit Kumar and Virendar Kumar were ranked second and third, respectively.

More than 220 paragliders, including 27 pilots from the Indian Army, took part in the event. The participants included 58 foreign pilots from 12 countries.

The Aero Club of India provided technical support to the event.

Sheltered by mountains and surrounded by rolling tea gardens, Bir-Billing, situated at a height of 2,290 metres and about 300 km from here, is considered to be one of the finest aero-sports sites in the world.

Its name has also been included in international circuits for steady thermals.