Kullu: Hill gods from all over Kullu valley assembled at Dhalpur ground in Kullu to mark their divine presence at start of the week long Kullu Dusshera that got underway with much fanfare here today.

Kullu Dussehra is a festival with a difference, as the week-long Dussehra celebrations begin here when they come to an end in the rest of the country. 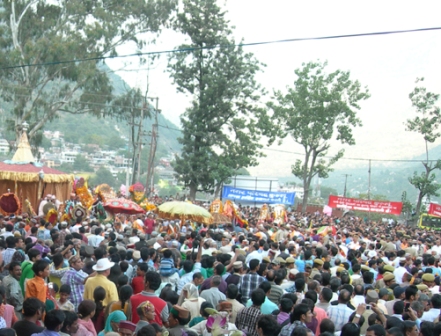 Kullu Deputy Commissioner B.M. Nanta said that over 200 deities assembled in Dhalpur ground to participate in the festival.

Nanta said Governor Urmila Singh inaugurated the festival by participating in the ‘rath yatra’ of Lord Raghunath, the chief deity, that saw the presence of thousands of locals and tourists.

When the palanquin of Lord Raghunath was wheeled out of the temple amid beating of drums and playing of trumpets, other assembled deities accompanied the chief deity.

The deities from different villages will be here during the festival and will pay obeisance to Lord Raghunath – as Lord Ram is known in the Kullu valley.

The festival dates back to 1637 when Raja Jagat Singh was the ruler of Kullu. He invited all local deities in Kullu from various temples to perform a ritual in honour of Lord Raghunath during Dussehra.

Since then, the annual assembly of deities from hundreds of village temples has become a tradition.

It is the only festival in the country where such a large number of deities are assembled at one place.

The administration has been inviting the deities ever since the rule of princely states came to an end.

Unlike other places, effigies of Ravan, Meghnad and Kumbhakaran are not burnt here.

The festival will conclude with the Lankadahan ceremony on the banks of the Beas river Oct 12. All the assembled deities will participate in the ceremony before being carried back to their own temples.

During the week-long festival, transactions worth millions of rupees will take place.

Kullu and Kinnauri shawls, handicrafts, carpets and dry fruits are a major attraction for the customers.

Himachal Pradesh has accorded the status of international festival to Kullu Dussehra, which attracts many tourists.