Dehra Dun : Undertaking developmental works without considering the ecology of the region has now become a pain not only for the government, its forest department in particular, but it is the people who are the ones at the receiving end.

And this is no small problems, but an elephantine one, as the wild tuskers have killed 13 people in the last one year. 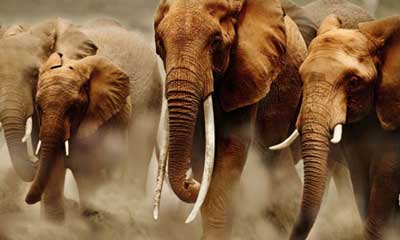 There was a regular migration route of elephants who moved in herds from the forests of the Corbett National Park, onto the Motichur Sanctuary and then to the Rajaji Sanctuary from where they crossed the Yamuna and moved to the adjoining forests of Paonta Sahib in Himachal Pradesh. Then they would return along the same route.

The reason why the pachyderms took their annual migration from one forest range to another was because of the fact that the forests could not cater to the fodder requirements of the large herds that roamed these areas.

And as fodder became scarce in one forest range the elephants moved on and on till they reached Paonta Sahib and started their return trip, which gave time for the regeneration of fodder in the forests.

However, the Ganga Canal was constructed in Hardwar from the Ganga which ran right through the traditional migration route of the elephants.

The Canal with its steep cemented sides became a virtual death trap for the pachyderms, and in the initial years a number of tuskers died attempting to cross the Canal as they would the Ganga earlier.

Thereafter they just gave up resulting that the migration stopped and the elephants that were trapped in one forest range could not move to another.

The forest ranges could hardly sustain the animals that were confined to the limited space, forcing them to move to the adjoining villages in search of fodder.

It resulted in a conflict between the villagers and wild elephants which has become deadly for both.

The animals finding their movements restricted with more developments works and houses encroaching upon their natural habitat have literally gone berserk.

Over the last one year alone, not have the razed a number of houses, specially in the villages, particularly in and around the Rishikesh area to the ground, but killed 13 persons, of which five alone have been in the Dhalwala region.

The last victim of a wild elephant (not a rogue elephant), was a tailor, Bhagwati Prasad Nautiyal who was killed on Thursday night while returning home to his village in the Dhalwala region.

A wild tusker, who tried to get to the village in search of fodder was forced to return to the forest by the villagers who created loud noises to scare the animal.

But rather than returning to the forest he went towards the road and the tailor who happened to be there became a victim of the animalâ€™s anger.

The elephant picked up the poor man threw him into the air and trampled him to death when he fell down, killing him instantly.