Shimla : A cultural troupe from Syria will perform at the forthcoming Kullu Dussehra festival in October this year, the Syrian ambassador said here Friday.

Ambassador Riad Kamel Abbas announced this after his meeting with the state chief minister P.K.Dhumal here. 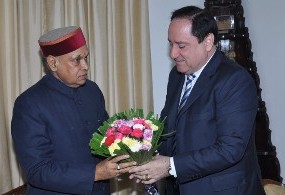 Foreign troupes have been regularly performing at the colourful Kullu Dussehra festival, but this will be for the first time a troupe from the Middle East will take part in a Himachal Pradesh cultural festival.