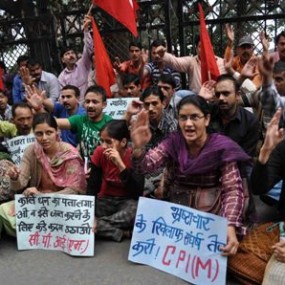 At one place BJP is participating in an anti-corruption drive against the UPA government but in the state where the party is in power it is working like a mafia for real estate barons, he said.

Kuldeep Tanwar, member state secretariat pointed out that Congress in the UPA government at Delhi and BJP in the state were trying to outdo each other over corruption.

He said that the state government had the dubious credentials of reinstating corrupt officials after briefly being suspended in corruption cases. â€œSome have even been convicted by the trial courts, he said.

Tanwar pointed out that a BJP member of parliament from Kangra was openly leveling serious corruption charges against a government of his own party in the state.

â€œInstead of investigating the charges, a faction of the party was trying to gag the voice of an MP, he added.

Issues about the party in power being a favourite crony of a industrial house and violations in HP land laws were pointed out by other speakers which included Sanjay Chauhan and Tikender Panwar among others.