Shimla: Standing by the statement that BJP was fast becoming a victim to dynastic politics, Shanta Kumar, senior BJP leader and a former chief minister made a scathing attack on corruption, saying that politics and politicians had become irrelevant in the fight against it as civil society was leading the agenda.

Addressing an Akhil Bhartiya Vidyarthi Parishad (ABVP) backed front Youth Against Corruption (YAC) the veteran leader said that social reformer Anna Hazareâ€™s protest at Jantar Mantar against corruption where two politicians who tried to participate were shoed away portrayed the credibility that politicians and politics holds in civil society. â€œOthers have come up and taken the place of political leaders,â€ he said.

Recognizing that corruption and hoarding illegal money in tax havens such as Switzerland had aroused global attention, Kumar said whereas governments such as that of USA, Germany, Spain and other had succeeded in recovering â€˜black moneyâ€™, the Indian government was the least interested in taking action on it.

He pointed out that India signed the United Nations Convention Against Corruption, 2003 agreement on 20th December, 2005 the last day of its validity, and ratified it on 20th October, 2010 after being pulled up by the Supreme Court and much prodding from parliament.

Laying hope on the youth to lead the war on corruption, he said that it was the biggest epidemic to grip the country and politicians were most responsible for it. â€œWithin 64 years of Independence, ideals of the freedoms fighters lay buried under corruption,â€ he said.

Amidst glittering wealth, stark poverty where 26 crore people are counted as below poverty line displays the path the country has taken, he said.

Referring to the double passport case against Baba Ramdevâ€™s aide Balkrishna, he said the speed with which the case is being investigated is surprising but it took several years and a Supreme Court directive to detain Hasan Ali, who is alleged to have billions of dollars hoarded in tax havens, to be booked for a similar offense.

Kumar said that he had let his party high command know that deterrence laws against corruption be made an integral part of BJPâ€™s election manifesto before the party solicits for votes.

The BJP vice-president asked for making the law for opening accounts in foreign banks more stringent by including a clause of 10 year imprisonment for wrongdoings, grant time for declaring black money, provide a Rs 50 lakh reward incentive to an informer and take immediate action against the persons whose names are with the government. 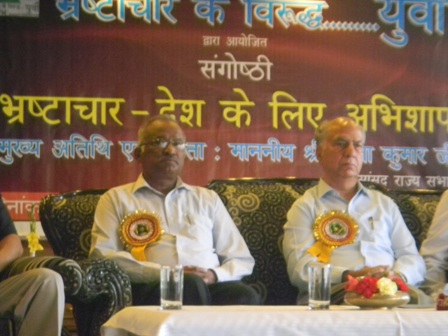 Later speaking to media persons, Shanta Kumar, who has not been attending the state BJP working committee meetings for the last two years, said that he stood by every word reported about his views on prevailing nepotism in the party.

Soon after asking Karnataka chief minister Yeddyurappa to resign over indictment in the leaked Lokayukta report, Kumar had said â€œFrom Himachal to Karnataka, the BJP has become more of a son, daughter and relative party than a party of workers… It is unfortunate…dynasty politics is slowly overpowering democracy in the party. Leaders are picking their successors as if it is their fiefdom.â€