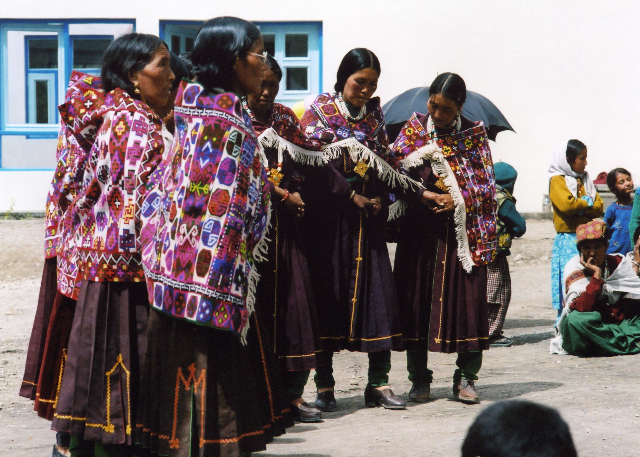 For most of the year, the Himalayan valley of Spiti is cut off from the world.

Spiti, the Himalayan cold semi-desert, is one of the highest, remotest and most inhospitable places on this planet. You could be forgiven for never having heard of it. It lies in Indian Tibet, just below Ladakh, a Buddhist valley that has preserved the traditional Tibetan lifestyle. We take the western approach, from Delhi to Chandigarh by train, then by 4WD via Manali, the Rohtang Pass and Kunzum La â€” which is blocked by snow from November to June. Getting there is an epic journey at the best of times.

There are eight of us, led by Joan Pollock, the founder of Spiti Projects, who has masterminded raising the money to build a hospital and a school in Spiti Valley. This is Joanâ€™s annual tour of inspection, but also her triumph, for her school is completed and we are heading for the opening.

We drive Indian-style â€” fast, with horns blaring â€” in a convoy of four Jeeps. At Manali we pause to catch our breath and get used to the altitude. We are now joined by three charming Tibetan Buddhist monks from South India, who have brought with them two fibreglass deer and a dharma wheel for the new school.

After Manali, we climb steadily to the 13,055ft Rohtang Pass, then down 19 hairpin bends on the other side. The road follows the turbulent Chandra River through a lunar landscape, bleak and desolate, strewn with huge rocks. Thereâ€™s nobody out here but the road-menders, and traders with strings of pack ponies. No manâ€™s land indeed. After 3pm, when the sun has melted the ice-beds, the road is liable to be washed away altogether. Itâ€™s probably the worldâ€™s most atrocious road â€” but it also has awesome views of glaciers and snowcapped mountains.

The Chandra Dhaba tea house is the first (and last) sign of life for many miles, but very welcome. Itâ€™s little more than four mud walls with a tented roof, but the bus has just rolled up and this is the rush hour. In the half-dark, drinking chai in the wasteland, I look at the weather beaten faces and think of Genghis Khan, who marched this way, and Kubla Khan, his grandson, who conquered Tibet â€” and Spiti â€” in 1262. Not much has changed here since then.

As we press further on, over the 14,950ft Kunzum La Pass, Spiti Valley stretches before us now: brown, dry, barren and beautiful, dotted with villages and green fields, where peas and bushes of Himalayan roses flourish. Above, the peaks are capped with everlasting snow. Snaking along the valley floor rushes the Spiti River, grey and turbulent.

The next day we hit Kaza, Spitiâ€™s capital and the height of civilisation. There are a few hotels and restaurants, two or three shops, a petrol pump â€” the only one in Spiti â€” even a tiny cinema. And, of course, Joanâ€™s hospital. Itâ€™s small, with just one eight-bed ward, but it has the only operating theatre in the valley: itâ€™s better than nothing. Before it was built, anybody in need of surgery had to go by taxi, or pony, to the hospital in Manali, 125 miles away, or get on the bus â€” no joke with a ruptured appendix.

Our final destination, Mane village, beyond the back of beyond, lies at 11,000ft, in the lee of an awesome brown mountain with Om Mane Padme Hum â€” â€œHail to the jewel in the lotusâ€ â€” painted in big white letters, halfway up. The houses are traditional Tibetan style, whitewashed mud-brick, with flat roofs, standing among fields of peas and plantations of rustling poplars. There are no streets, no cars, no restaurants, no foreign exchanges and no hotels: you stay with the natives â€” and make friends for life. Prayer flags flutter on every roof; water hurtles through narrow irrigation channels; the stillness is breathtaking. 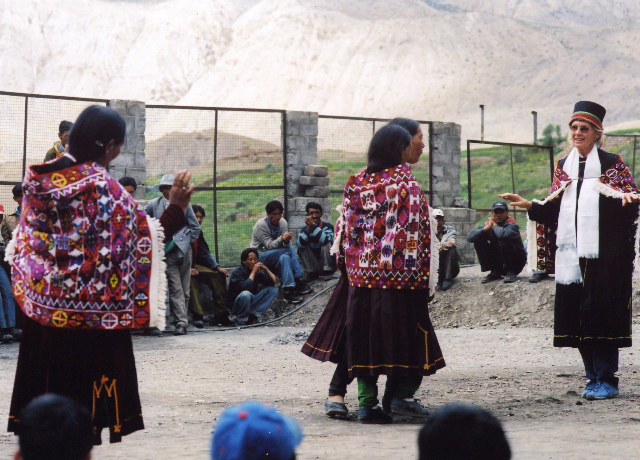 Jeet â€” a smiling government official in a cowboy hat â€” who has supervised the building of the school, has kindly invited us to stay in his house. We climb a ladder to the front door. There are no taps, no bath, no shower; the lavatory is a hole in the mud floor; and Jeet keeps three cows, two ponies, seven sheep, nine goats, two dzo (half cow, half yak) and two donkeys. It sounds primitive, but the house is spacious and smells enticingly of earth, woodsmoke, incense. In winter, when the temperature can fall to -30C, Jeet parks his beasts in the basement, where they are safe from wolves and snow leopards, and double as central heating. Up here, the dzo still pulls the plough; the donkey is still the principal means of transporting goods. The mains electricity is a bit dodgy, but there are satellite dishes on many roofs, and solar panels: Spiti is gradually catching up with the 21st century.

In the evening, Jeetâ€™s wife, Samtan, walks with us through the pea fields, where the women are still working. I like this place where everybody pulls together, whether picking peas or minding the animals on the high pasture, or sweeping snow â€” all seven foot of it. Life is tough, co-operation is vital… and these people never seem to stop smiling; I guess itâ€™s Buddhism that explains their remarkable serenity. If you want to spend 10 years meditating in a cave halfway up the mountain, the Spitians will not think it strange: that degree of devotion commands respect up here. 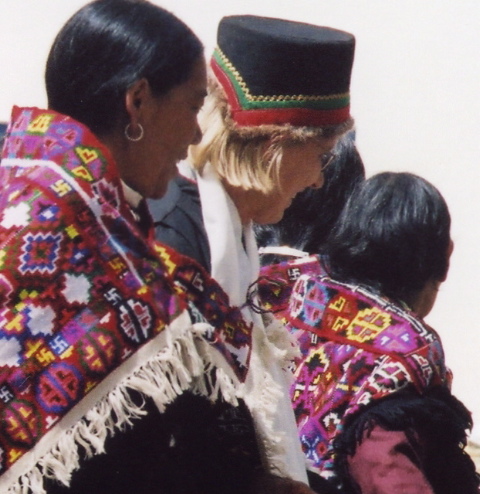 We eat momos â€” Tibetan stuffed dumplings â€” and try tsampa, or roasted barley flour, the staple Tibetan food that is baked into bread, or mixed with a little yak-butter tea. Samtan makes tea for us, using the bazooka-like brassbound churn. Itâ€™s salty, but not unpleasant. After dark, I climb the ladder to the roof: no streetlighting, and not a car headlamp in sight. The moon shining on the Himalaya is unforgettable.

In the morning, I wake to the bells of pack donkeys, and voices calling in the Spiti dialect, which nobody has ever written down. At Manali the greeting is the Hindi namaste; in Spiti itâ€™s a joyous joulay, joulay. Today is specially joyous, because itâ€™s the grand opening of Mane school: a splendid solar-heated building, now decorated with prayer flags and balloons. The monks have painted the deer and dharma wheel yellow and fixed them on the roof.

The junketing begins when 15 lamas from Dankhar, the local monastery, with their Rinpoche (head monk), perform a special puja for the school. Wearing their crimson robes and the eponymous headgear of the Gelugkpa sect, the Yellow Hats, they are a stirring sight. The former Minister for Tribal Development declares the school open, and we sit under an awning with the minister and the monks, honoured guests. The audience, cross-legged on the ground, is the population â€” maybe 500 people, including the lucky pupils. We are presented with six white scarves, and eat some fabulous sticky yellow Tibetan sweet, washed down with Pepsi.

Traditional Spiti dances follow, with Tibetan trumpets and some funky Himalayan drumming. Seven men in red-tasselled hats and magnificent silk robes perform a dance with heavy swords. The girlsâ€™ dance is elegant, with much hand-waving, but the womenâ€™s dance steals the show. When they really get going, Joan is made to join the line â€” a great honour â€” and thereâ€™s much smiling and laughing. I like very much the unconditional friendliness of these people, who welcome visitors by sticking their tongues out.

SPITIâ€™S PHENOMENAL landscape is reward enough for flying halfway round the world, but the valley also has half a dozen important Buddhist monasteries. According to tradition, Rinchen Zangpo, the Great Translator, was sent by King Yeshe Od of Guge, about AD996, to build 108 monasteries across the western trans-Himalaya. Legend says Tabo gompa (monastery) was built in one night: shrewdly sited at the crossroads of two ancient trade routes, it flourished on the offerings of merchants carrying gold, salt, fine wool and tea. We arrive during the monksâ€™ siesta, but we get to inspect the nine temples, the famous murals and painted mud statues of Buddhist gods, all wearing clothes, uncannily lifelike.

The following day we visit the 16th-century gompa at Dankhar, a cluster of whitewashed buildings sprawled across a spectacular rock high above the river. At 12,774ft we drink chai with the Rinpoche and his lamas. We visit the novice monks in the schoolroom, where they sit cross-legged on the floor, red-robed and shaven-headed, chanting their lesson. Spiti follows Tibetan custom: the eldest son inherits house and land; the younger sons enter the monastery at seven or eight years old. 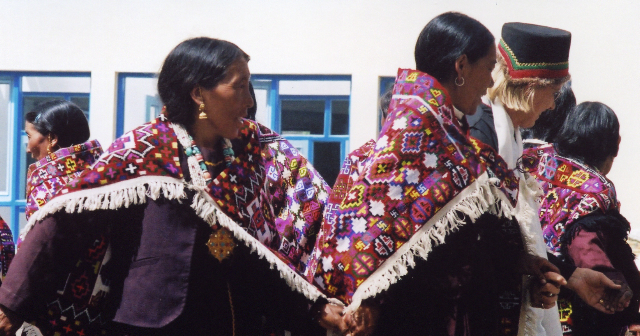 That afternoon, we trek into the Lingti Valley, famous for fossils. Tenzin Lama, the smiling head monk of Lhalung gompa, happens to be at Dankhar, and he walks home with us, following the sheer cliff of Palangri (17,500ft), a flat-topped mountain of awesome vastness, concertinaed in some antediluvian upheaval. We pass gangs of road-menders, Nepalese migrants (earning 81 rupees a day â€” about Â£1), who smile and say joulay, and bow to the lama, hands together.

Inside the Serkhang, or Golden Temple, at Lhalung there is a very special atmosphere. Some believe this is another of Rinchen Zangpoâ€™s foundations, more than 1,000 years old. Whatever their age, the mud sculptures of Buddhist gods are extraordinary. Many have fingers or toes missing, however, and the frescoes have been damaged by rainwater. In fact, the villagers have asked Joan to help restore the temple, and our trekking is sponsored, to raise the money.

After another night under canvas, we trek over the mountain to Demul. It looks idyllic from above, an oasis of brilliant green field-terraces, but Joan sees another village of dirty children. Part of her campaign is to teach the Spitians that it might be a good idea to wash. Jeet rounds up the kids in the dusty street (zero traffic); Joan and the girls hunt fleas, apply head-lice shampoo, and the hose. This is the famous Pollock hygiene clinic, made very popular by the reward â€” combs, toothbrushes, balloons.

The return journey to Delhi, via Manali and Simla, is not without excitements: a 4WD gets stuck in a stream; to the botanistsâ€™ delight we find the elusive blue Himalayan poppy… First, though, we stop at Kunzum La. We form a circle by the shrine, shout â€œSo-o-o-oâ€ three times, throw tsampa to the winds, and wish. The monks wish for world peace and a free Tibet. I wish for all that, of course, but Iâ€™m hooked by this cold desert full of warm people: I also wish to come back.

Duncan Sprottâ€™s new novel, Daughter of the Crocodile, is published by Faber.