Speaking about the benefits of walking, the chief minister heeded the young crowd before flag off about the dangers of global warming that was threatening livelihoods.

He said that there was need to protect the environment by checking all polluting activities so that the damage due to climate change and global warming was minimized. 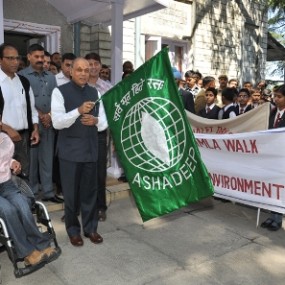 The government would soon be putting up bags or dust bins in transport buses to facilitate scientific disposal of garbage and save the roadside environment of degradation.

Students needed to act as ambassadors of saving the environment and energy by educating the society about this cause, said Dhumal.

The government was even considering putting up of hoardings at all major tourist destinations about the advantages of switching off air-conditioners in vehicles and breathing the pollution free air in the hills, he said.

Ashadeep president Susheel Tanwar said that the NGO was working for creating awareness about health issues and importance of energy and environment conservation by involving education institutions in campaigns.