Prof.Dhumal inaugurated Sobha Singh Museum; second phase of the existing gallery and evinced keen interest in the exhibits, which included pictorial â€˜life and works journeyâ€™ of the artist and six sculptors by him. The Chief Minister congratulated the family members for making a â€˜great effortâ€™ by preserving and conserving the invaluable paintings, personal belongings and photographs of â€˜great immortal artists of the world.â€™ The new Museum will provide new facets of the artistâ€™s personality to the art world, including tourists, connoisseurs, art lovers, students and general masses. 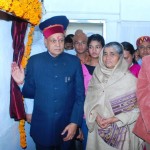 new complex for Sobha Singh Art Gallery befitting his stature in the International Art World. The family members informed the Chief Minister that display of all invaluable works in a small place undermined the importance, safety and preservation as the paintings were vulnerable for damage and preservation was difficult as conservation and other safety features could not be installed due to small size of hall. It was told that the original works of S. Sobha Singh with the family were heritage of the State and the Nation and family considered itself as mere custodians. They sought patronage of the government for preservation and conservation of paintings in a new complex of Sobha Singh Art Gallery. It was informed that saint-philosopher-artist S. Sobha Singh created his major works (from 1947 to 1986) at Andretta which brought wide acclaim to Himachal Pradesh. The Chief Minister assured all help in this direction. 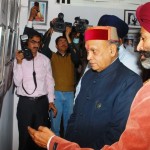 Earlier, the Chief Minister was enthusiastically received by Bibi Gurcharan Kaur, daughter of S.Sobha Singh, her son Dr.Hirday Paul Singh and his family and villagers.