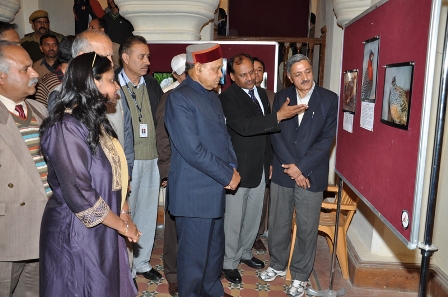 Shimla: Chief Minister Prem Kumar Dhumal made an appeal for saving birds as well as other flora and fauna for maintaining ecological balance in the hill state.

Speaking at the inauguration of a three day photo exhibition of birds at the Gaiety Theater, the chief ministers said such exhibitions were instrumental in providing rare glimpses to avi-fauna to the society and helped to sensitize them towards the environment.

Birds are an important link in our ecology and many species were facing extinction because of changing weather patterns, he said.

The exhibition has put up pictures of some rare birds as well as some peculiar habits of species captured on frame that are not normally visible to the naked eye.

Besides bird lovers, children and tourists have found interest in the pictures put up at the gallery.

The pictures have been captured by photographers Somesh Goel, an additional director general of police (ADGP), Manjula Mathur, Gobine Bhardwaj and Umang Dutt.

Other than the resident bird population, Pong Dam Lake on Kangra has become a popular destination for winter migratory birds, some of which fly down from Siberia and Central Asia, giving photographers a chance to observe and catch rare birds on film.

Birdwatchers and wild life department who monitored the winter flocks put a count at about 1.5 lakh birds at Pong Dam which has been declared a protected Ramsar sanctuary zone. More than 230 species of birds belonging to 54 bird families have been recorded at Pong wetland.

Birds that have been spotted in the lake include flamingos, grey and purple herons, egrets, spoonbills and storks.