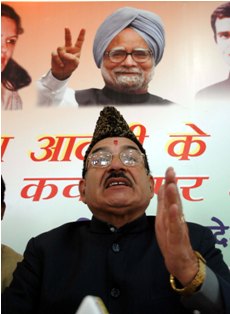 Despite gross misuse of official machinery and rejection of nominations of congress candidates, he said, congress candidates have been elected for president in 18 urban bodies, which includes Solan, Sujjanpur Bhota, Nadaun, Nurpur, Palampur and others.

Besides the presidents election, congress candidates have won on 21 posts of vice-president, for which a direct election has been held for the first time, he added.

Speaking about the governments claims to zero tolerance to corruption, he said that despite having given an affidavit in the High Court, the people had lost faith in the government who were seen to be tolerant towards corruption.

He said the other issue that the civic body election reflected was sale of land. â€œThe voters will never tolerate sale of land,â€ he said.

â€œThe government had thrown a challenge at us about contesting the urban body elections on party basis,â€ said Kaul Singh, â€œwhich we readily accepted.â€

Laying claim to some rebels having won the elections as independents, who had been suspended from congress party, the state congress president said the party would re-consider its decision.

â€œThe rebels had only been suspended and not expelled. The party would re-consider its decision and would take the some suspended members depending upon the parties criteria, he said.