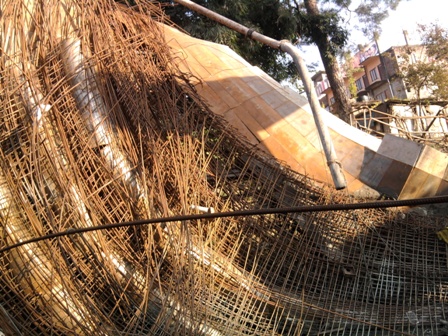 PALAMPUR: One persons was killed and ten others received serious injuries when a span of under construction bridge collapsed near Sitla Mata Madir in Palampur this afternoon.

Enquiries revealed that a bridge was under construction on a bye pass of Pathankot- Mandi highway. Mr. S Behal contractor was putting cement concrete on one of the spans of the bridge this afternoon. As per rules NH officials were also present on the spot to supervise the lying of slabs.

All of sudden the shuttering of bridge came down along with heavy structures of steel resulting in the death of Mr. Kuldip Katoch a work Inspector of National Highway, while another work inspector of the NH was seriously injured and referred to DMC Ludhiana. Mr. Behal contractor was among the injured persons. 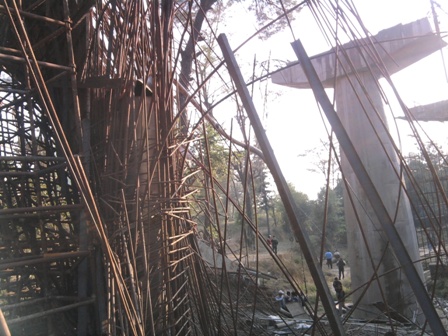 SDM Palampur Mr. Ratten Gautam along with team of local youth and fire brigade men immediately reached on the spot, launched relief and rescue operation. The labors and technical staff of NH buried under tons of steel, shuttering and debris were extracted and shifted to local civil hospital.

SDM Ratten Gautam let My Himachal News know that all injured have been admitted to local civil hospital, where condition of five persons was stated to be precarious. Senior officers of national highway authorities had reached on the spot . The cause of bridge collapse could not be ascertained immediately. He said Deputy Commissioner Kangra would soon order enquiry into accident.